Between the lines … When the Pope came to Hamtramck 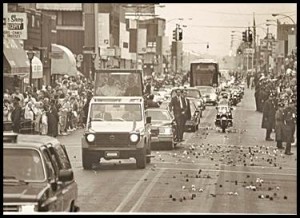 Pope John Paul II travels down Jos. Campau in his Popemobile. He visited Hamtramck 31 years ago, on Sept. 18, 1987.

By Charles Sercombe
It was 31 years ago this past week when former Pope John Paul II visited Hamtramck.
The Sept. 18, 1987 visit has been duly noted by folks belonging to a Facebook page dedicated to Hamtramck. The group is specifically known as “Hamtramck Memories – Back in the Day.”
Hamtramck was still a mostly Polish city at the time, but the demographic change was coming quick. Pope John Paul II was the first-ever Polish pope in history.
Prior to Karol Cardinal Wojtyla becoming Pope, he was Archbishop of Krakow.
He was no stranger to Hamtramck, having visited here in 1969 where he received a hero’s welcome even back then.
The town in the late 1980s was a faint echo of its former 1950s-era self.
Thirty-some years ago Jos. Campau was still bustling with business, with hardly an empty storefront in sight. Conant, though, was showing signs of blight.
All of that was on the verge of change.
There was one last hurrah for the city, but it was not the last time the city would come under the national and international media spotlight. The summer building up to the Pope’s visit was busy with special events and public discussions. There were also high expectations of a huge surge of folks wanting to be here for the historic occasion.
I was here working at the now defunct Citizen newspaper. Like any beginning reporter, it was a special moment to experience history in the making, and witnessing a small town pumping itself up for such an important visitor.
The plan was for the Pope to speak outside, at the corner of Jos. Campau and Holbrook, where the Town Center shopping center is now.
A huge stage was built in the week before the visit.
Local restaurants and bars and all businesses were encouraged to stay open all night before the big visit. A huge turnout was expected.
The manager of McDonald’s had two semi-trucks parked, loaded with extra food. Turns out it was a waste of preparation.
While there was a party atmosphere the night before, hardly anyone showed up by morning.
Many blamed it on the Secret Service who clamped down the city so tight, folks didn’t want to experience the hassle of even getting into the city. But for those who lived here or former residents who came back to town just for the visit, it was a fun time.
“Everybody loved everyone. It was a great atmosphere. We need more things like this to bring the world together again,” said a member of the Hamtramck Memories Facebook page.
Said another member of the Facebook page: “I lived on Holbrook right across the street from where they built the stage. We were partying all night, had a house full of relatives. My son was on the front page of the Jackson paper he was holding a sign that said ‘Welcome Pope’ in Polish.”
My job was to ride with the photographers on a flatbed truck that travelled in front of the Popemobile.
As the folks noted in the Hamtramck Memories Facebook page, it was a wild ride down Jos. Campau, which started at Davison, a little before 8 a.m. The day was gray and unseasonably cold.
In most cities you see a slow cruise of the Popemobile with the Pope smiling and waving to folks lined up on the streets.
There was no one waiting at Davison, and the ride was not a slow one. Instead, the press truck shot off like a cannon and we sped down Campau at about 40 miles per hour – never slowing down until we got to Hewitt, where the stage was.
The Pope went by so quickly, it was a blur for most.
“The day he drove down Campau we walked up 15 minutes before he was scheduled to drive down Campau got right up front and watched him speed 40 mph down the street. The poor old lady next to us starts shouting ‘Wait! Come back, come back,’” said one member of the Hamtramck Memories page.
I was barely able to capture a clear photo from the speeding truck. I remember holding on for dear life as there was only a thin metal railing keeping us from falling out.
The ride was too fast, too bumpy, and it was too overcast and dark to get a good shot.
The best moment of that ride was when the driver attempted to turn right on Hewitt from Jos. Campau and smashed into a Detroit police car.
All of the press photographers fell down, much like in a “Keystone Cops” scene. The embarrassed driver, believe it or not, got a ticket.
So why was the motorcade going so fast? I never found out, but the speculation was that the Secret Service was afraid that if it went slow, someone would try to shoot the Pope – because you know, this is Detroit.
The security was so heavy-handed only about 20,000 – maybe 30,000 – people showed up.
Plus, the weather was lousy too.
That didn’t deter the Pope, who went on to give a one-hour speech. Most of it was in Polish, meaning most of those in attendance had no idea what he was saying. They may have been of Polish-descent, but that didn’t mean they spoke Polish fluently.
The theme of his speech was that we must keep in touch with our ethnic roots.
He was speaking about the Polish-American experience, since there had been a huge migration of Poles to America before and after World War II.
He stressed that “the nation which lets itself be cut off from its tradition descends to the level of a tribe.”
As for any trouble, there were two incidents. One involved a guy on Andrus St. who came out on his porch waving a plastic handgun. He was promptly arrested and taken away to a hospital for “observation.”
The other incident was a group of about six protestors carrying signs denouncing the Pope. One of the signs said: “Pope is Satan.”
They, too, were arrested. 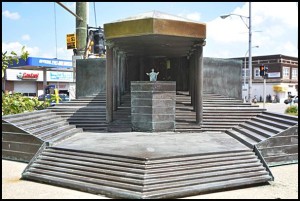 A monument stands at the corner of Jos. Campau and Hewitt where the Pope spoke.

There is still one last vestige of the Pope’s visit remaining. Right outside the parking lot, at the corner of Jos. Campau and Hewitt, there is a monument depicting the stage built for the Pope.
If you drive down there to see it, be careful about making a turn on Hewitt.