Bidding war on Hamtown Farms was ‘David versus Goliath’ 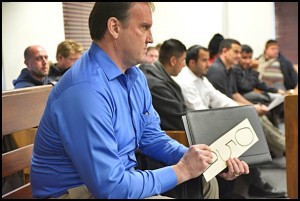 Mike Kowalski of the Kowalski Sausage Co. bids on a parcel of city-owned lots but is outbid by Hamtown Farms. Kowalski wanted the garden lots for his business, but declined to say what he planned to do with them.

The Hamtown Farms project is saved, but it came at a steep price.

At Thursday’s first auction round of city-owned lots, Farms organizer Mike Davis managed to outbid Kowalski Sausage Co. on all but one tow our of nine parcels. The bidding was tense at times, with both sides sometimes edging upward by only $50 increments.

Mike Kowalski represented his family’s business, which is next-door to the lots, and won the first parcel up for sale, bidding $11,000.

But Hamtown Farms won the next three lots, which comprise the main portion of the project. It cost the organization a total of $22,950 – probably the most anyone in the history of Hamtramck has ever paid for seven parcels. 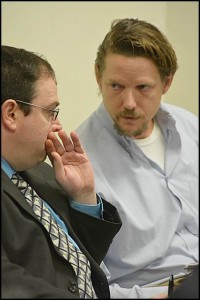 Mike Davis (right) of Hamtown Farms talks with his attorney during bidding for the lots where the community garden is located.

He said the one lot the Farms lost had been planted with 20 trees. The portion where the raised garden beds were saved.

The Review asked Kowalski what he planned to do with the lot he won, but he had little to say.

“We’ll see,” he said as he walked out of city hall.

Kowalski told city officials that he planned to develop the site where the Farms is located. He declined to confirm that with The Review or talk about expansion plans in general.

Brian M. Dupuis, an attorney representing the Farms, questioned the motive of Kowalski.

“Why are they bidding against a community farm?” Dupuis said.

The auction for the Farms’ lots was the last to go, but a dozen or so people stayed for the bidding war.

Rodney Srodek likened the battle as a “David versus Goliath.”

Davis had created an online fundraiser to purchase the lots, and shortly before the auction announced he had exceeded his $20,000 goal. Davis also said that he had received private donations outside of the online fundraiser.

Asked what he plans to do next, Davis said he will officially turn the Farms organization into a non-profit. Davis said he is working through People’s Community Services to form the non-profit.

As for the city, it raised a total of $49,400 from its first auction of city-owned lots of over 60 lots. The city has a total of 340 lots to sell, and six more auctions will be held in the coming months.