Boxing coach has an eye for picking Olympic contenders 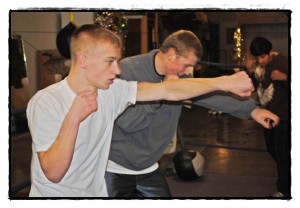 Note to all the kids who like to fight after school – there’s a time and a place for everything.
In your case, it’s every weekday at 4 p.m. at the Hamtramck Boxing Club, located in the upstairs of the G-Mart Co. clothing store at 10012 Jos. Campau.

The club, operated by local resident Ted Palac, has been training the next generation of Olympic fighters – literally – for the last 14 years. A former boxer for the Polish national team who left the country after he fought a match in Sweden in 1966 and never came back, Palac is a five-time Level 4 coach for Team USA.

Throughout his career, Palac has traveled with his fighters all over the United States and to 23 countries. He is a four-time coach of world champion boxers, and, before plans were canceled due to the eruption of a volcano that wreaked havoc on international air travel, was slated to be the US Team Manager for the 2010 Youth World Championships in Azerbaijan. The contest is held every two years and is the most prestigious tournaments in the world for youth boxers.

On any given day you can find about a dozen fighters – from age 7 to 29 – jumping rope, hitting speed bags and sparring in the old-school gymnasium’s regulation-size ring. Palac’s fighting technique combines the elements of both Cuban and Russian fighting styles, and after 52 years in-and-around the ring, he shows no signs of slowing down.

Currently, Palac is training a few boxers that he believes could be future Olympians. In May of last year 132-pound boxer Paul Tchupyk was crowned Silver Gloves Champion, and he’s got high hopes for 106-pound fighter Bilal Ahmed. But even those who aren’t trained by Palac can benefit from his expertise, as was the case last year when he volunteered his skills as corner man for two fighters whose own corner men failed to show up.

“If you’re a good boxer, you can get scholarships and be paid good money. And besides, you can travel,” says Palac. “You can even have a chance to go to the Olympics and see the world.”

Think you’ve got what it takes to fight for Palac? If you’re interested in learning more about the Hamtramck Boxing Club stop by 10012 Jos. Campau at 4 p.m. during the week. Training sessions are open to the public and cost just $5.