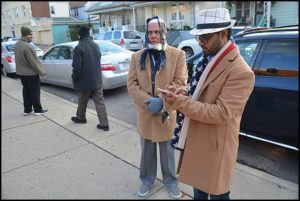 By Charles Sercombe
Hamtramck has three new city councilmembers
In the council election held today (Tuesday, Nov. 5), Nayeem Choudhury, Mohammed Hassan and Mohammed Alsomiri were the top three vote-getters in the field of six candidates vying for three seats on council.
And for the second time in a row, since the August primary election, an incumbent councilmember, Saad Almasmari, was knocked out of the race.
In the August primary, Councilmembers Anam Miah and Abu Musa lost their bid for re-election.
One of the new councilmembers is familiar to city politics.
Hassan is a former councilmember who a few years ago decided not to seek re-election and instead challenged Mayor Karen Majewski for her job.
He lost that election.
Here are the results of Tuesday’s election.
Nayeem Choudhury … 1,380
Mohammed Hassan … 1,209
Mohammed Alsomiri … 1,113
Saad Almasmari … 1,086
Carrie Beth Lasley … 847
Robert Zwolak … 813
Those seeking election results on the city’s website won’t find them. The city does not post the results. Instead, the city clerk sends the results to the Wayne County Election Clerk. But as of 10 p.m., the county had not posted the absentee ballot results.
The city council race was the only ballot issue for Hamtramck voters.
Nov. 5, 2019