Business owner says zoning decision was based on ‘racism’ 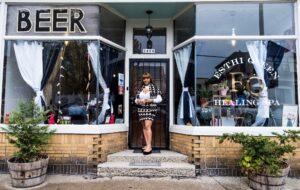 Tiara Boyd is accusing some city officials of racism and sexism after being denied by the Zoning Bard of Appeals to operate her spa on Florian St. Photo supplied by Esthi Queen Healing Spa.

By Charles Sercombe
The rejection of a zoning change for a neighborhood spa by the city’s Zoning Board of Appeals has led to accusations of racism and sexism.
Tiara Boyd, the owner of Esthi Queen Healing Spa on Florian St., two doors west of Brombach, had been in business for about a month when city officials told her she had to get a business license and a zoning variance.
The city’s zoning codes do not allow spas in residential areas.
Getting a variance from the ZBA is usually a routine matter.
But three ZBA members, Naser Hussain, Adam Alharbi and Malek Hussein, denied the request, citing concerns from some neighbors about limited parking, and who the spa’s customers would be.
The three votes were enough to prevent a needed two-thirds majority vote required by the seven-member ZBA. ZBA members are appointed by the city council.
The backlash on those voting against the variance was immediate.
Boyd is an African-American, and she said the comments made by some residents in the area of her spa were racist and sexist.
“As you all may or may not know, yesterday I experienced racial and sexist acts towards me and my business Queen of Skincare from the ZBA Arabic men of Hamtramck,” Boyd said on her Facebook page.
Boyd started a petition to “Stop racial and sexual discrimination against EQ Spa.”
“Outside of the remarks and slander, they said my business is a possible danger to their community, and they don’t know ‘what type of people’ I will bring.”
The spa promotes itself as taking a “holistic” approach to facials, mani- and pedi-treatments, and body waxing. Boyd, a licensed esthetician, also offers her own line of cosmetics and treatments.
All three ZBA members deny that their decision was racially motivated. They insist that parking is a legitimate issue of concern, and that Boyd failed to show a hardship, which is one requirement for a variance.
“There is no racism. For the Zoning Board to allow a variance the applicant has to demonstrate that a ‘unique hardship’ exists for his/her business to be exempted from the rules, which the applicant failed to demonstrate in last night’s meeting,” said Nasr Hussain, on a Facebook page called “Hamtramck Square.”
“The Zoning ordinance does not allow spa shops in residential areas. If the residents of Hamtramck think that this is unfair, they should force the planning commission, headed by the mayor, and council, to change the rules of the Zoning ordinance. The zoning board goes by rules set there.”
Hussain said the push against his decision is part of the “cronyism” and corruption in city hall.
He also said that the city could easily change the ZBA rules, and that this backlash is prompted by Mayor Karen Majewski.
“When an applicant, who is a friend of hers, fails to meet all these criteria and his/her application gets denied, she goes out crying and accuses the board that implements her rules of being ‘racist’ while she is the true racist who made these rules in the first place to exclude those whom she doesn’t like.”
As mayor, Majewski does not set the rules of the ZBA.
Majewski had this to say, on her Facebook page, about the ZBA rejection:
“The beautiful spa, the Esthi Healing Spa, an African-American woman-owned business, was DENIED a variance to open on Florian Street by the ZBA. City council just approved a variance for the same purpose yesterday, without question. We just had this discussion last night, affirming the tradition of mixed residential and commercial in Hamtramck.
“Concerns were raised about parking and traffic, but there is already a church and a school and a dentist office right there. How much traffic would a spa create? … Certain businesses and business owners and clients are encouraged, but certain others are not. I know how I read this.”
At the ZBA meeting, which is held via zoom, Boyd said that the impact on parking is minimal, because her clientele is based on appointments only, which are staggered to cut down on traffic.
She also pointed out that she has an agreement with the dentist next door, to have her customers park in his parking lot. Business hours are also limited to 10 a.m. to 5 p.m., which is when parking spaces are usually opened up.
The spa is in a storefront that has a housing unit on the second floor – which is a typical style of the many markets that were once tucked into residential areas.
Grace Stamper, the city’s Economic Development Associate, said at the ZBA meeting that “Hamtramck was really built to have these small businesses in neighborhoods.”
ZBA member Mark Hausner pointed out that there is a school, a church, a bar and a coffee house in the same residential area.
“It’s arguably more commercial than residential,” Hausner said.
Fellow ZBA member Hamilton Jordan said that as far as showing hardship, Boyd already has — by investing in the storefront.
“The case for hardship is clear to me,” Jordan said.
ZBA member Adam Alharbi said that his decision to reject the variance was based on neighbors’ concerns over parking.
“I’m pro-business, but this type of business is too close to residents,” he said.
Boyd said she plans to appeal the ZBA’s decision.
Posted July 23, 2021