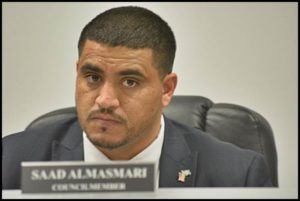 By Charles Sercombe
This year’s campaign season is just a few weeks old, and already the gloves are off.
City Council candidate Carrie Beth Lasley is asking the city to rule that Councilmember Saad Almasmari is ineligible to be on the primary ballot, and to also pursue criminal charges against him for saying in his filing to be a candidate that he was qualified.
The request was made on April 23 in a letter to the city, which The Review obtained in a Freedom of Information Act request.
Lasley said Almasmari filed to be a candidate “knowing he was in debt to public bodies.”
Lasley further said in her letter: “I would like the city to consider a criminal referral to demonstrate its commitment to fair elections and rule of law.”
According to the city charter, there is a section saying that anyone who is a “defaulter” to the city or any other government agency cannot be elected or appointed to office.
It is Section 6-08 of the Hamtramck City Charter, and it says:
“No person shall be elected or appointed to any office who is a defaulter to the City or to any board, or office, or department thereof, or to any school district, county, or other municipal corporation of the State, now or heretofore existing. All votes for the election or appointment of any such defaulter shall be void.”
That charter section has never been enforced, and there has been speculation that it would not hold up in court.
Almasmari is seeking re-election, but has a history of falling behind on his taxes and water bills throughout his term in office for the last four years.
Almasmari is not alone. The Review has previously reported on other city councilmembers who have been delinquent in paying bills owed to the city.
Reached by phone, Councilmember Almasmari, a Yemeni-American, told The Review: “I don’t have to be rich to be a candidate. What’s behind this is racism, and me opposing marijuana.” 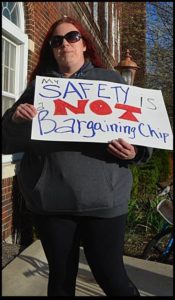 Lasley, a frequent critic of city officials, has advocated for the city to allow medical marijuana grow facilities to operate here, but only in industrial areas of the city that are away from neighborhoods.

Almasmari and a bare majority of the council have so far blocked that from happening.
Lasley is also no stranger to the issue of an elected official being a “defaulter” to the city.
A few years ago, she submitted documentation to the city showing that, in 2015, Councilmember Anam Miah lost property he owned in Detroit to foreclosure after failing to keep on top of property tax payments.
But, in a review of the matter, then-City Attorney John Clark said that since the issue happened before Miah was elected, he was not technically a defaulter.
The latest issue came to the public’s attention in a proposed resolution for the city council to hire an outside law firm, the Miller Law Firm, to handle the matter.
City Manager Kathy Angerer said, in a background letter to the council, that she is recommending hiring an outside firm “in order to be completely impartial.”
But the resolution also stirred up another controversy. Lasley said there is a conflict in hiring the Miller Law Firm because a member of that firm, Melvin “Butch” Hollowell, was also a former member of City Attorney James Allen’s law firm and had “invested” in it.
Allen said Hollowell left his firm eight years ago.
At Tuesday’s council meeting, a lengthy discussion was held on whether to hire an outside legal firm.
City Attorney Allen said he declined to investigate the matter because it could ultimately affect other candidates in the election, and he wanted to remain impartial on the matter.
A suggestion was made to request the state Attorney General to step in, but Angerer said that office only takes up state law issues. The council eventually voted to approve hiring an outside attorney to look into the complaint, with Councilmember Andrea Karpinski being the sole opposition.
It is expected the investigation will take about two weeks to complete.
Prior to the council meeting, in an exchange on her Facebook messenger service, The Review asked Lasley if she thinks hiring the law firm with Hollowell would affect how her complaint is handled.
Lasley replied:
“I really don’t have a thought one way or the other. It certainly opens the city up to additional litigation on the matter. I do wish the city would take transparency, and the appearance of transparency, seriously. It is perhaps the leading cause of the hostility we see in our government. This shows me there is still no interest in reducing hostilities.”
The Review also asked Lasley whether she was the one who had made the complaint about Almasmari.
She replied: “I don’t think if it was my challenge or another person challenging is relevant to the issue, but I would imagine that would be available to you by FOIA or by asking the City Clerk or Mr. Almasmari.
“I also don’t believe it appropriate for me to discuss any issues that my competitors may be facing at this time.”
Instead, she said, she is “focused on my own campaign, finding fiscal solutions to the (negative) $1.8 million budget being proposed this week and moving Hamtramck forward responsibly.”
City Clerk August Gitschlag confirmed it was Lasley who filed the complaint against Almasmari. The Review subsequently filed a FOIA request.
Almasmari, once again, appears to not be the only candidate who is in default to the city. According to city records, candidate Mohammed Hassan also owes money to the city.
Hassan is a former councilmember who has previously fallen behind on water bills while in office. That was during a time when the city was still under the control of a state-appointed emergency manager. That manager declined to take action to remove Hassan from office.

However, Lasley does support allowing medical marijuana grow facilities to operate in the city, but only in industrial areas, away from neighborhoods.

The Review apologizes for the error.

The above story has been edited to accurately reflect her viewpoint on the issue.

In a Facebook message to the reporter Lasley had this to say:

“You owe me a retraction. You have intentionally misstated my on-the-record position on marijuana to your own political agenda.”

The Review did not “intentionally” misrepresent her view on the matter, nor is there a “political agenda.”

10 Responses to Candidate’s eligibility is questioned