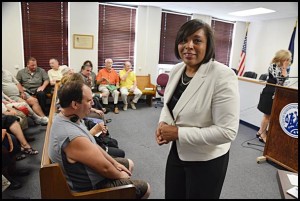 By Charles Sercombe
The gloves are off.
It took just a little over a year for city councilmembers to unload on Emergency Manager Cathy Square.
Square has been in charge of the city for 14 months after being appointed by Gov. Snyder and has at most, by law, four more months before she leaves. Councilmembers have been – for the most part – reserved about their opinion of Square’s job performance.
It wasn’t until a recent city council meeting where the monthly report on city finances changed their public attitude about Square.
Although the city boasts a $2 million surplus compared to this time last year, councilmembers were peeved.
But not because of the city’s improved financial situation.
Councilmember Anam Miah was the first to unload.
“This is great,” he said about the controller’s monthly report, the first of which the council has received since Square took office. “At least it’s something we can look at. But this is not giving us any information.”
Miah explained that the numbers may all add up, but the council is not being told how those figures were arrived at, nor what decisions were made to justify the budget.
“What has been done?” he asked.
Mayor Karen Majewski, who has been the most outspoken about Square – though she usually reserves her comments for her Facebook page — questioned the cost of the search for a permanent city manager.
She said Square hired a private company for $34,000 to find candidates for the job but has yet to produce anything after almost two months. Majewski also said that the same service could have been done by the Michigan Municipal League for no cost.
“This is appalling,” Majewski said.
Square was off work this week and was not available for comment, but in the past when criticism has popped up, she has declined to respond.
Miah continued his criticism, suggesting that the council pass a resolution of their displeasure and send it to state officials.
“We are tired of the incompetence of the emergency manager,” Miah said.
Councilmember Robert Zwolak, who has been known to sling a barbed comment at others from time to time, urged “caution” on the matter and to first work out specific complaints in a special council session.
Mayor Majewski said that although she agrees the council should speak to the state through a resolution, she pointed out that she and others on council have repeatedly called state officials to vent their frustrations about Square.
“All of these shortfalls have been expressed to the state multiple times,” Majewski said. “Personally, I don’t think it (the resolution) will have any effect.”
Square may have gotten off on the wrong foot with city officials when she said after taking office that she would not attend council meetings.
She has held public hearings twice since arriving last July, both times required by the law governing emergency managers.
Square has also not attended community events.
The council set Sept. 12 at 6:30 p.m., a half hour before the regular council meeting, as a work session to hammer out a resolution of complaint about Square.