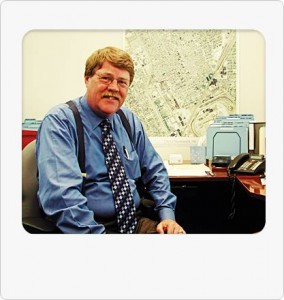 UPDATE, March 9, 2012: In a not an unexpected move, the city council and Mayor Karen Majewski fired City Manager Bill Cooper at a special meeting on Wednesday evening.

The Review went to press a day earlier than usual this week, and could not report on the meeting for Friday’s paper.

Majewski had to break a tie vote on council to fire Cooper. Those voting in favor were Tom Jankowski, Mohammed Hassan and Abdul Algazali.

The reason for the firing was over Cooper’s failure to deal with the city’s ongoing financial crisis (see below), and failing to follow-up on a number of other items.

There had been a long-simmering criticism of Cooper by some on council, especially Councilmember Jankowski.

Cooper is disputing whether there was “just cause” for his firing, which is a requirement in his contract. It is likely he will file a lawsuit, and Councilmember Cathie Gordon said this could end up costing the city $200,000.

Cooper had five months to before his contract expired.

Cooper’s firing also comes days after he fired City Attorney James Allen. In a strange coincidence, or maybe not, Allen was also previously fired by former Cioty Manager Don Crawford. That action also backfired on Crawford. He, too, was fired shortly after firing Allen.

In the meantime, Majewski and Councilmember Jankowski are proposing to hire Eric Tungate as Acting City Manager. Tungate is the former Director of Community & Economic Development in Hamtramck.

Gordon and Councilmember Robert Zwolak say Tungate’s hiring would violate the city charter, and that he is also unqualified for the job.

A special meeting was scheduled for Friday evening to take up Tungate’s hiring. Both Gordon and Zwolak said they would not attend the meeting. There was speculation that there would not be enough councimembers present to take official action.

Gordon and Zwolak are proposing to tap into a list of available city managers through the Michigan Municipal League. Majewski is president of the MML.

City employees could face three months of no paychecks starting in early April.

That was the news on Tuesday when City Manager Bill Cooper issued a press release saying the city will run out of money needed to meet payroll by that time.

In addition to that, employees will not be paid for one day per month through June. There was one positive note: Cooper said benefits will remain intact.

“This action was necessary due to an ongoing drop in overall revenues, combined with increasing costs,” Cooper said in the press release.

Cooper said employees can expect to see repayment of what is owed beginning in July, when property taxes begin to roll in, and running through the remainder of the year.

But that’s no guarantee, either, Cooper said.

“How quickly this occurs is dependent upon cash flow for the city during this period,” Cooper said.

City officials have been warning of payless paydays for the last several weeks.

By next year, the city is facing a $3.4 million budget deficit.

In the press release, Cooper outlined the following financial setbacks the city has experienced in the last two years:

The closing of American Axle’s plant resulted in a loss of $600,000 a year in property and income taxes.

Property taxes overall from the city had decreased by $200,000.

Speaking of property taxes, the city faces a further loss of $200,000 to $400,000 if property owners are successful in their pending tax appeals.

And on top of that, house values continue to drop, which could mean an additional loss of $350,000 in the year to come.

Expected revenue from the GM Poletown plant came in $1 million short. Instead of receiving $1.7 million this year, the city is only going to get $700,000.

Health insurance for employees has always been a major expense, and costs continue to rise. The city was hit with a 30-percent increase in health costs, which translates to an additional $700,000 the city has to come up with.

When Gov. Snyder took office, he slashed state revenue sharing to all communities by one third. For Hamtramck, that was a loss of $600,000, and Cooper said more cuts from the state will include an additional loss of $200,000.

Cooper said the city has already taken several steps in reducing costs. But he said it’s now up to the city’s employee unions to step up.

“City unions have agreed to some concessions, but more needs to be done in ongoing efforts to close the gap between revenues and expenditures,” Cooper said.

Payless paydays could be the first step in bringing in a state review of Hamtramck’s finances, which could then lead to the appointment of an emergency financial manager.

We asked for reactions from the firefighters’ union, but its president declined to comment at this point.

Jon Bondra, vice president of the police officers’ union, said payless paydays will be “devastating” for the police department as well as all city employees.

“Some of the guys go paycheck to paycheck,” Bondra said.

“What can you do? We’ve been through this before. We know we’ll get our checks. It’s just a matter of time.”
Acting Police Chief Max Garbarino said he is concerned what three months of not receiving paychecks will do to his department.

In the meantime, the city council met on Wednesday evening to discuss the city’s financial situation. The Review went to press on Wednesday, a day earlier than usual, and cannot report on what was said.

Councilmembers Abdul Algazali and Mohammed Hassan also called for a special meeting on Wednesday evening to talk about Cooper’s contract and employment.

According to sources, a proposal will be made to fire Cooper. Cooper’s contract does not expire for another five months.