City honors two for saving others from danger 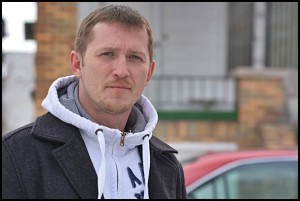 Thanks to the fast-thinking of Ryszard Pasienski, three people escaped from a house fire unhurt.

At the end of January, a few heroes emerged in the city of Hamtramck.

Ryszard Pasienski, a resident of Sterling Heights, was visiting his sister who lives in Trowbridge St. a few weeks ago. He said at 9 a.m. he heard someone screaming outside.

“I looked out of the window and saw that the house across the street was on fire,” Pasienski said. “They couldn’t escape … and so they were screaming.”

Although the tenants from the lower level of the two-story house were able to leave the burning house, two girls and a man residing on the upper floor flat were unable to get out.

Pasienski said he ran to his truck and pulled out a ladder.

“I took it out, put it on the porch, and the tenants from upstairs came down the ladder,” he said. “The minute the girls and the guy came down from upstairs, the fire trucks arrived.”

Everyone was safely removed from the house.

Hamtramck Fire Chief Paul Wilk gave a certificate of appreciation to Pasienski for his assistance and courage.

Pasienski said he appreciates the certificate, adding that “everyone would do what I did if they had a ladder in their truck.”

The teen was kidnapped from outside of her Detroit home while she was searching for her cell phone. According to Detroit police, the man who approached her hit her in the head, forced her into his car, and while driving to his apartment in Hamtramck made “sexually explicit comments” to her. The teen managed to escape from the car near Commor St. and sought help from Bell Jr.

Bell’s action allowed police to arrest the suspect, William Fortson, who has since been charged with several felony counts.

Bell couldn’t be reached for comment, but when he was handed a certificate of appreciation at a recent city council meeting he said: “This is my city, and I’d do it again if I had to.”