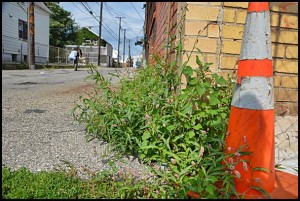 City code enforcers now have a new ordinance to go after noxious weeds.

By Charles Sercombe
City code enforcers, armed with an updated ordinance, are cracking down.
And, predictably, not everyone is welcoming that.
Take longtime business owner Shimpu Barua, who recently received two tickets for allowing weeds and trash to collect behind her building at 9350 Jos. Campau.
“For 15 years I’ve been in business, and I’ve never received a ticket,” she said.
She marched into city hall demanding to know what was going on.
Welcome to the city’s new code ordinance that bans noxious weeds — just the kind that grow out of the concrete cracks behind her building. On top of that there were pieces of thick plastic piled up, which she said must have blown over from somewhere else.
Barua, a former member of the Downtown Development Authority, which has jurisdiction over the entire Campau business strip, said she had earlier cut the weeds and couldn’t understand why the city gave her a ticket.
She faces being fined $100, with this being her first offense.
The city’s Director of Community & Economic Development, Kathy Angerer, said it doesn’t matter how many times you cut and remove weeds.
“She (Barua) has to follow the ordinance,” Angerer said. “It has to be maintained the entire season.”
In a way, Barua can’t be entirely blamed for failing to keep up. The city’s track record on enforcing codes has been spotty at best. For decades the city has run hot and cold on enforcement, sometimes coming down heavy-handed, other times hands off.
Over the years, the message to the community has been mixed.
Angerer, who is in charge of code enforcement, said she is serious about enforcing the codes.
“Our goal is for a safe and clean Hamtramck. We’re encouraging people to take care of their surroundings,” she said.
“I’m going after this big time.”