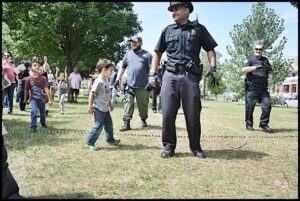 The city is seeking to hire police officers and is offering $1,000 to pay for uniforms for new hires. File photo

By Charles Sercombe
The Hamtramck Public School District isn’t alone in offering hiring incentives.
The City of Hamtramck is also offering a $1,000 bonus for those who are hired into the police department.
The money, however, is restricted to the purchase of uniforms.
The department has a long history of officers leaving for greener pastures in other communities. The incentives are usually better pay and working conditions.
Hamtramck is not alone.
At a recent city council meeting, it was explained in a note to the council that:
“The ability of police agencies to recruit, hire and retain qualified police candidates has been a difficult task throughout the country.
“Quite often even if candidates are hired, they receive extensive training and ultimately move on to other agencies for a variety of reasons but often for monetary reasons. “
Interim City Manager Max Garbarino, who used to be the Hamtramck’s police chief, said the recruitment of new officers nationwide has been “devastating.”
New officers are not the only ones who qualify for a financial incentive. City employees are also invited to make referrals of candidates.
City employees who do make a successful referral for the positions of police officer, dispatcher and reserve officer will be awarded $500.
After one year, if the new hire is still employed by the city, another $500 bonus will be given to the city employees who made the referral.
“The thought is everybody is on board for recruiting,” Garbarino told the city council.
Over at the public school district, it’s now offering up to $15,000 for those who successfully apply for a special education teacher position.
That offer is also extended every year to new hires who stay for up to another five years.
Posted Sept. 30, 2022