City opts to take a small step in sidewalk repaving 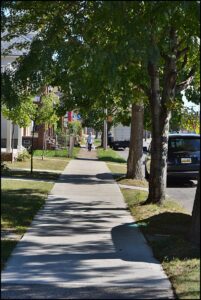 The city will be undertaking a modest sidewalk replacement program this year, starting on the southend. Homeowners will not be charged for new slabs.

By Charles Sercombe
Not only is there an ongoing alley repaving program this year, there will now be a sidewalk replacement project.
The city council initially rejected a comprehensive citywide sidewalk repair proposal because the cost of the repaving would have been passed on to property owners.
It was rejected on the grounds that COVID caused economic stress on many households. In other words, many homeowners are broke.
So, instead of beginning a citywide plan, the council opted for a much smaller plan that will be funded by a state road repair grant that the city receives each year. Homeowners will not be charged for sidewalk slabs that are replaced.
The new plan will spend $100,000 from this grant, and will cover only a small portion of the city.
Recently, the council agreed to take a first step toward that project, and OK’d spending $3,500 on an engineering study to determine which sidewalk slabs need to be replaced.
That study will focus on one section in the southend: the area bounded by Holbrook, Jos. Campau, Denton and St. Aubin.
“This is a marathon, not a sprint,” said John Hennessey, of Hennessey Engineers – the firm that will conduct the field study.
It’s not known how much of the first section that $100,000 will cover. It could be that only a portion of that section will have sidewalk slabs replaced.
The program would continue next year, when a similar amount of money will be proposed.
While it may seem like this will all go at a snail’s pace, Hennessey said that it’s common for cities to adopt a long-range plan over 10 to 15 years.
“We don’t know how far we’ll get in area one with $100,000,” Hennessey said.
Sidewalk slabs that will be replaced are those that are cracked or lifted up. Sidewalks that are in good shape will not be replaced.
City Manager Kathy Angerer said replacing bad sidewalks is part of an overall plan “to make the city safe and walkable.”
In total, there are 80 miles of sidewalks in the city.
March 26, 2021