City parks will never look the same after this year 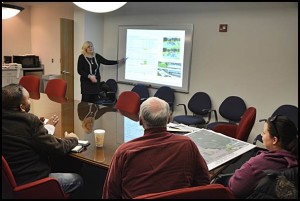 Kathy Angerer, the Director of Community & Economic Development, outlines improvement plans for the city’s three parks at a special meeting for the city council.

By Charles Sercombe
Hamtramck’s three city-owned parks are about to get a half million dollar makeover.
Plans for the park improvements were unveiled last week at a special city council work session, and were given the council’s blessing this week.
Kathy Angerer, the city’s Director of Community & Economic Development, has been working on the plans since September 2013.
The scope of the project is historical and has no apparent equivalent in the 93 years the city has existed. Funding, which amounts to about $450,000, comes from multiple sources of revenue streams — none coming out of the city’s general operating budget.
“”There’s a lot to do, but it’s all very, very do-able,” Angerer told the city council.
So, what’s in the works? There are two common threads in all of the parks: more greenery in the form of trees, bushes and flowers, and new lighting.
Let’s go park by park.
Pope Park at Jos. Campau and Belmont, which boasts a monument to the late Pope John Paul II – the first-ever Polish-born pope – will have the iron gating ripped out and reused in Veterans Memorial Park.
The brick pavement will also be removed and replaced with a stamped brick pattern. Look for more trees and a lot more benches. The park’s mural will also be cleaned up.
New lighting will be added, making this a destination spot during the day and night.
The city will get a financial helping hand by a non-profit group, the Karol Wojtyla Park Committee, which has already been fundraising for improvements for the park. The total cost for the park is roughly $60,000.
Zussman Park, which is located across from city hall, will get a dramatic new look featuring amphitheater seating and a pergola-looking structure, all tailor-made to host special events and weddings.
The center of the park will be replaced with new concrete work and two additional walkways will be added. Parking will also be increased with the addition of angle parking spaces that will cut a little into the park.
The monument to Lt. Raymond Zussman, who was awarded the Congressional Medal of Honor for his heroics in World War II, will be moved to the main entrance of the park and elevated.
New lighting will also be installed.
The improvements, said City Councilmember Titus Walters, will make “city hall look like city hall.”
Plans for the city’s third park, Veterans Memorial, are the most ambitious. It will be good news for families and kids.
Starting at the front, the gating around the memorial will be removed and placed with the iron gating from Pope Park in the front of the park.
The fencing will be interspersed with bushes to create an attractive front, but still low enough for police to monitor the goings-on inside the park.
Just past the monument there will be a play area with new play equipment and fitness stations for adults. On the south side of the park along the edge and continuing around the bend will be beds of wild flowers, something to not only buffer neighboring houses but also educate kids on native species.
There will also be additional picnic tables and seating, an additional eating shelter, a restroom, a new drinking fountain and a connecting a walkway that will encircle the park.
Like volleyball? The park will sport two beach-styled volleyball courts.
As for the ice rink, kids get your skateboards ready. The rink will be transformed into a skateboard park that will have plenty of banks to show off your skills.
Bids for the work will be published soon, and the project is slated to begin this spring.
Work should be completed by October.
The only voice of doubt came from Councilmember Robert Zwolak who said he doesn’t think city department heads can keep up with the project.
He refused to vote on the project, despite a ruling in Robert’s Rules of Order, a common set of rules that many governing bodies adopt, including Hamtramck, that says it’s the “duty of every member who has an opinion on a question to express it by his vote.”
Despite assurances from Angerer that the project can be handled by the city, Zwolak said: “Prove me wrong.”
Mayor Karen Majewski had nothing but praise for the project, despite objections from Councilmember Zwolak who insisted she could not speak on the subject since she is not allowed by charter to vote on the issue.
“This is the culmination of work over many years by many people,” she said. “I applaud this project.”