City’s new parking meters gets a tweak in operations 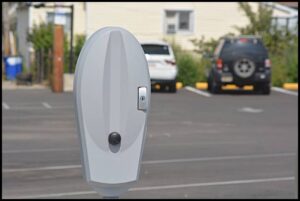 Public outcry over the new parking meter system led to some changes in its operations, but will that be enough? Royal Oak has the same meter system, and folks there are demanding its removal. File photo

By Charles Sercombe
City officials are hoping that new adjustments to the rules governing the city’s controversial parking meters will win over critics.
But that may prove to be a tough wish.
The backlash against the meters has been growing in recent weeks. The complaints include: confusion over which parking space to punch in at the pay stations; paying, but still getting a ticket; the download app not working; and general confusion on just how to use the hi-tech digital meters.
Hamtramck isn’t alone in complaining about the new meter system, which is suppled by Municipal Parking Systems. The same meters were recently installed in Royal Oak, and there is now a call for them to be removed.
(Note to Hamtramck: the parking situation could be worse: In Royal Oak, you have to back into a parking space on some streets.)
The meters are located in the Jos. Campau Ave. business district and city-owned parking lots servicing that district.
A number of Jos. Campau business owners have complained about losing customers because of the meters.
Hussain Murray, the owner of a pawn shop on Jos. Campau, said he has lost many customers because of the meters.
“Jos. Campau is empty now,” Murray said.
At Fresh Valley Market on Caniff, which is next to a city parking lot at McDougall, the owner, Mo Almasmari, said a number of his customers either were confused about how to use the meters and got tickets, or paid and still got tickets.
He waived a stack of those tickets to a Review reporter, pointing out that he paid for them.
“If I don’t pay them, I’ll lose customers,” he said. “It’s hurting our business.”
In response to the public outcry, a city council sub-committee, consisting of Councilmembers Mohammed Alsomiri, Nayeem Choudhury and Refai Khalil, came up with modifications that include:
o The hours of enforcement being reduced from 8 a.m. to 8 p.m. down to 8 a.m. to 6 p.m.
o Two additional holidays being added when parking is free. The holidays are to celebrate the two Eids that happen in each year.
o Monthly parking passes that allow drivers to park anywhere being lowered to $25 per month.
o There is now a 30-minute grace period for city lots that will allow shoppers to get their groceries or merchant items without having to pay.
The new policy will start this Sunday (when parking is free), May 1.
Posted April 29, 2022