Cold streak has Cosmos in a skid 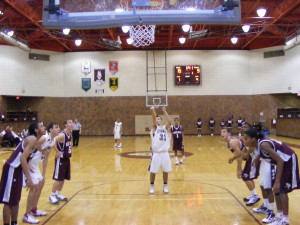 By Ian Perrotta
Review Staffwriter
Hamtramck High’s boys basketball team is streaking, but not in a good way. The Cosmos have lost their last four games.
Two Fridays ago (Jan. 22) the team played Harper Woods. Despite starting off cold, by the half the Cosmos held a one point advantage over the Pioneers. However, it didn’t last, and with Harper Woods making most of their free throws down the stretch, the Cosmos ultimately lost 65-61. Hamtramck’s bright spot in the game was junior Anthony Nrecaj, who was hot from outside and contributed 30 points.
“I think my guys were a bit overconfident going in because we had so much success at Clarenceville,” said Head Coach Mark Nezich.
Last Tuesday’s (Jan. 26) game against Hazel Park looked like it would be an easy victory for the Cosmos but ended in a heartbreaking 88-86 overtime loss. Hamtramck led 24-10 at the end of the first quarter, but Hazel Park quickly came back, and from there it was back-and-forth until the fourth quarter. Down by 12 points with 2:30 to play, the Cosmos rallied around some big shots and great defense to even the score, but a mistake by the ref prevented them from sealing the deal.
“We had the last possession of regulation, and Mike Kaigler drove to the basket but was fouled and the ref didn’t call it,” said Nezich.
The game went into overtime but the Vikings took the lead and maintained it until the end. There was a chance to tie or win the game in the last possession, but the shot ended up falling short. Despite the loss, Head Coach Nezich was happy with the game overall.
“I am extremely proud of the way my team played and it was a great team effort,” he said. “Hopefully we can take this kind of effort out to Lutheran North Friday to get another Metro Conference victory.”
Statistically speaking, the game was great for several of the Cosmos. Nrecaj scored 24 points while Senior Javantae Hines added 17. John McKenzie had 15 points and six assists, and Kaigler had 10 points and seven assists. The team as a whole had 21 assists and only 11 turnovers.
“This was our best ball control game of the year,” said Nezich.
Last Friday (Jan. 29) the team played Lutheran North at home. Without two starting players, the team was shorthanded but tried to make the best of it. Deonte Snow led the Cosmos with 15 points, and seniors Sadiq Islam and Javontae Hines each had nine baskets. However, the team lost the game 65-41.
“The game was much closer than the score indicates,” said Nezich.
And finally, on Tuesday (Feb. 2) the team played its second game of the season against Cranbrook, losing by a score of 61-56. Even without its leading scorer, the team still managed to keep in contention with Cranbrook for much of the game. Hines led the team in scoring with 20 points and went seven-for-seven from the free throw line. Senior Eldin Paric added 13 points, and senior Leslie Jordan came off the bench to score five points and make a huge defensive stand against Cranbrook’s leading scorer.
“This was another game where we had some opportunities down the stretch but things just did not go our way,” said Nezich.
The team’s next game is tonight (Feb. 5) at home against Clarenceville. It will be your only chance to see them play until Paczki Day, when Lutheran North heads to Hamtramck for a rematch. Tipoff for both games is at 7 p.m.