Cosmos player on track to make it big 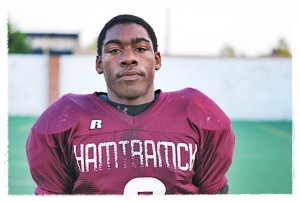 If you’ve watched Hamtramck’s football team play this season, then you’ve probably seen Jonathan Blanding.
On the field he was pretty much everywhere.

Blanding, the team’s senior captain this season, starred for the Cosmos on both sides of the ball at running back and linebacker.

This season, Blanding had 108 tackles and had several multiple-touchdown games.

Wells said Blanding was a sophomore with some raw talent, but he had a lot of work to do to improve.

But over the past few years, Blanding has hit the weight room, and also attended several elite football camps to become a complete player.

Blanding began his football career as a defensive back, but as he got bigger, the move to linebacker was a natural progression.

“He’s a great tackler and a tough kid,” Wells said.

Despite his success on both sides of the ball, Blanding said he has more fun on defense, which makes sense.

His defensive statistics have included games with as many as 18 tackles.

“He’s always around the ball,” Wells said of Blanding’s instincts as a defender.

But Blanding is a bit more modest about his individual success.

While his days playing football for the Cosmos may have ended last Friday, Blanding’s not likely finished with football.

He said, right now, he’s working on polishing his grades and ACT score and targeting a potential football scholarship.

According to Wells, Blanding certainly has what it takes to play at the next level.

“If he stays focused, then he’ll succeed,” Wells said.

One Response to Cosmos player on track to make it big