Cosmos volleyball is on a roll 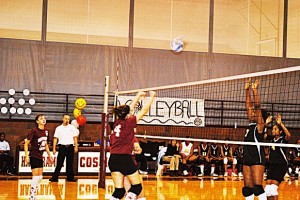 It’s been a perfect season so far for the Hamtramck High Volleyball Team.

After the team seemingly imploded on itself last year, the Cosmos experienced a complete turnaround under the guidance of new head coach Charrisse Youmans, a science teacher at the school. They continued their unbeaten domination this week by defeating University High School on Monday (Oct. 18) and Highland Park on Wednesday (Oct. 20).

At Monday’s home match against University, the Cosmos needed all five games to secure victory over the Driving Eagles. It was the closest match of the season and wasn’t decided until the final minutes of the last game, when the lady Cosmos sealed the deal by winning the game 16-14.

The match-up was incredibly exciting for those in attendance, many of whom were there for Parent Appreciation Night. In between sets, the parents and guardians of each player were invited to join their daughter on the court for a special recognition ceremony. Also recognized during this event were the team’s three seniors, Almedina Kljajic, Almedina Kaltak and Bridgette Szelestey.

During Wednesday’s competition against Highland Park, the Cosmos froze out the Polar Bears, taking the team to an 11-0 record for the season. The team’s next game is on Monday (Oct. 25) against Southfield Manoogian, and on Saturday (Oct. 30) they head to Grand Blanc for a tournament to finish out the season.