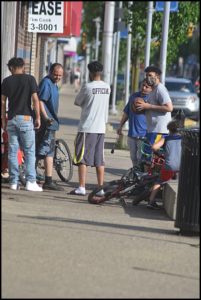 The return of warm weather is welcomed, but it also has resulted in more street crime. File photo

By Charles Sercombe
There was one positive about the coronavirus quarantine for these past few months.
Crime went down – at least, crime that was reported to the police department.
That respite may have ended.
Now that warmer weather has arrived, crime is starting to see an uptick. That makes sense, to a point, since more of us are getting outside again.
The crimes reported include property damage, drunk driving, and various thefts.
While the governor has ordered all of us to “stay home, stay safe” except for essential work or essential chores, such as going to the grocery store, we were simultaneously being encouraged to go outside and get some exercise and recreation.
Provided that we practice social distancing, and that we wear masks while in enclosed public spaces: such as markets.
That includes when going out for a walk. Unfortunately, this means that criminals who are on the prowl to steal things can now easily blend in with others outside.
Have packages being delivered at home? Beware, porch pirates have come out of quarantine.
There have also been an increasing number of assaults as more people go outside.
During the Memorial Day weekend, there were a number of complaints about fireworks going off late at night. Also, one Memorial Day reveler apparently got a little too much into the celebratory mood and fired a gun into the air. The bullet ended up striking a person’s car.
No injuries were reported in that incident, and it was unknown who fired the gun.
One crime trend that was persistent during colder weather was domestic assault.
The quarantine hasn’t helped matters. Even though warmer temperatures are allowing us to go out, tensions are still running high.
The number of domestic assault cases have seen a spike in recent weeks.
Posted June 5, 2020