Deal is sealed to save the Yemeni mural from obstruction 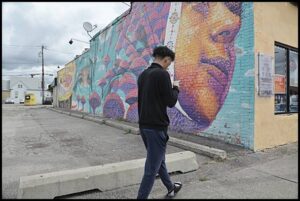 City officials and volunteers were successful in saving a mural depicting Yemeni life on Goodson St. from being obstructed by a proposed new construction project.

By Alan Madlane
The Yemeni mural shall live on.
Local social action group OneHamtramck recently issued a press release touting the end of a three-year negotiation to save the mural they initially commissioned back in 2011, and which was realized two years later by Chilean muralist Dasic Fernandez.
“I am incredibly grateful for the collaborative spirit that so many displayed during this process to preserve what is now an historic icon for the city of Hamtramck. Art is a beautiful way to share culture and this mural embodies that spirit,” said Bill Meyer, founder and chairman of OneHamtramck.
The mural resides on the south wall of the Sheeba Restaurant building at 8752 Jos. Campau Ave., a half-dozen blocks south of Holbrook and just north of Veterans Park. Parts of the mural appear hard to see, due to trees that somewhat obscure it — judging from the current Google Earth photo.
The agreement reached between advocates for the mural and the property owners of the lot that initially wanted to build in front of it is said to be working out for all involved.
The mural is considered important to the community, as many aspects of its creation process, including fundraising, choosing of the artist, design concept and so forth, were done with considerable input from Yemeni community members.
The negotiation process to save the mural came to involve numerous figures around town, including the mayor, city council, city manager, city attorney, zoning board, planning commission, and the director of YAPAC (the Yemeni American Public Affairs Council), and others.
“Yemen has gone through one of the worst humanitarian crises in modern history. The war has destroyed many parts of Yemen’s rich history and, more importantly, has taken the lives of so many,” said State Rep. Abraham Aiyash, who is a Yemeni-American and who helped negotiate the deal to save the mural.
“This mural helps the many immigrants and refugees stay connected with so much of that culture and history and tells a story of the Yemeni people’s resilience.”
In the end, the Islamic Center of Hamtramck stepped up to lease the lot for the next 20 years, intending to maintain it so that the mural can continue to be enjoyed by all.
Posted Oct. 1, 2021