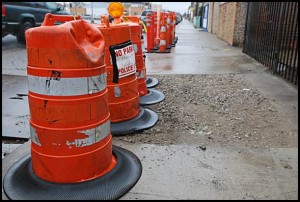 Expect to be inconvenienced for the next few months as DTE Energy finishes up a gas line and sidewalk replacement project.

DTE Energy is about to finish up the gas line replacement project that it began last year, as well as install permanent new sidewalk slabs to replace those that had to be dug up for the project.

DTE was not able to pour permanent sidewalks last fall because cold weather was fast approaching. Instead, the utility company installed “temporary” slabs.

Even that effort was undermined when cold weather hit the area earlier than expected. That meant a number of sidewalk slabs were left empty, forcing pedestrians to walk on gravel-filled, uneven areas.

Hamtramck Director of Public Works Steve Shaya said he expects the project to be completed by July at the latest.

Although many residents were inconvenienced by the project last summer, on the plus side many of the city’s broken sidewalks are being replaced for free.

DTE’s sidewalk replacement project will also coincide with a city-funded sidewalk repair project that is about to start up.

City officials are putting together a map of where the repairs will take place. Homeowners have no need to worry about being socked with a sidewalk repair bill in this case.

The city is dipping into a $2.5 million state fund for street and sidewalk repairs to pay for the project.