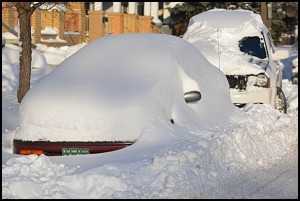 How do you deal with a major snowstorm? For some residents, they don’t bother to dig out their cars, but for others there is no option.

This week’s dumping of about a foot of snow raised an old debate in town.

To plow, or not to plow (side streets that is), that is the question on the minds of some Hamtramckans.

Or in other words, is it nobler to plow all of the city’s side streets or suffer
the slings and arrows of outrage?

(Our apologies go out to William Shakespeare.)

On the one hand, it’s argued that if you plow Hamtramck’s narrow one-way streets, you end up clearing the middle lane but burying the parked cars in even more snow.

And besides, it’s too expensive to do the whole city.

On the other hand, please clear the streets.

Mayor Karen Majewski revisited the issue earlier in the week on her Facebook page, saying Emergency Manager Cathy Square had initially OK’d clearing the side streets but then “pulled the plug.”

Majewski also went on to complain that Square’s decision-making was done without consulting or informing her or the council.

Normally, the city has its main arteries and fire routes plowed, leaving the side streets untouched.

On Tuesday, Square talked with The Review and cleared up the situation. She said that after talking with the police and fire chiefs, she found out that the city does not have an emergency snow plan.

Most cities declare a snow emergency when at least six inches of snow falls. That means residents cannot park on their street until it is cleared.

But in Hamtramck, the situation is more complex because most households do not have a driveway to park in, meaning residents would have to likely park blocks away in public or private parking lots.

Square said she also found out that plowing all of the streets would likely cost upwards of $50,000. Still, she said that is do-able because the city can tap into a state fund that pays for street maintenance, which includes snow plowing.

The city has over $1 million sitting in its account.

What this week’s snow emergency amounts to, said Square, is a lack of “leadership” because city officials failed in the past to address the issue.

“To have the money and not to do it is a lack of leadership,” Square said.

Square also pointed out that there is no contract provision to do side streets with the city’s current contractor, meaning that also has to be hammered out.

The upshot of all this, Square said, is that she will come up with a snow emergency plan.

In the meantime, residents resorted to what they have always done: shovel out their own parking space and when they have to leave the spot, place an old chair or bucket there to reserve it.

Or, in some cases, just ignore the whole thing and wait for the snow to melt.

Maybe old Shakespeare has a better suggestion in dealing with winter:

“To sleep: perchance to dream …”