Easter: More than a religious service in Hamtramck 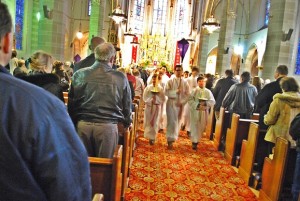 By Greg Kowalski
Special to The Review
It just doesn’t seem logical that the celebration of Easter would warrant
headline news, but it did.
“City Goes to Church During Tre Ore,” proclaimed the banner headline
across the top of the New Deal newspaper on March 28, 1937. The reference
was to the three-hour religious observation on Good Friday, commemorating
the time Jesus spent on the cross before dying.
It’s still commemorated today, of course, as it has been for centuries.
But at that time, in Hamtramck especially, the religious service was
virtually a civic one as well. The city government shut down for those
three hours while just about everyone went to church.
Not much had changed by 1941, as the Citizen newspaper carried a Good
Friday front page story “City in Hush for Tre Ore Period Today,” the
headline read.
“All will be quiet today from the hours of noon to three o’clock. The
wheels of business and industry will halt while the devout attend Tre Ore
church services,” the story related.
Indeed, signs would be posted all over town: “Closed: noon to 3 p.m.” Jos.
Campau would be empty. Only the churches would be packed. And the reference
to the quiet was not an exaggeration. Even the playing of a radio was
forbidden in most houses during those three hours.
Religion — particularly, the Catholic religion, Polish-style –was engrained
in the culture and society of Hamtramck. It came with the Polish immigrants
who brought a strong connection to their faith with them when they came to
Hamtramck in the first decades of the 20th century. That was reflected in
the churches they built, starting with St. Florian, a magnificent English
Gothic structure, which was paid for with the miserly sums they got for
working in the auto plants. Yet to them, the sacrifice was worth it.
Polish Catholics did not make up the entire population of the
city – Baptists, Methodists and even a small Jewish community – were
present in the city. But the overwhelming number of residents were Polish
Catholics. Their traditions came to dominate much of the town, including
closing things down on Good Friday.
Of course, it wasn’t all solemn. Then, like today, Easter was a time of
flowers, fine fashions and even parades in some areas. The local stores
knew the holiday offered a chance to capitalize on sales.
“Dress-Up for Easter,” proclaimed an ad for Moskins’s Credit Clothing on
Jos. Campau in the New Deal newspaper. Easter Suits & Coats were only
$19.98.
Over at Max’s jewelry store, you could “Beautify Your Easter Table with
the World’s Finest Silverware.” No price was given but “50 cents a week
will do.”
New Palace Bakery was offering pineapple coffee cake for Easter.
You might find some of that there today. Even Kresge’s dime store offered
Easter specials. “We’re shopping at Kresge’s this Easter!” its ad
proclaimed. Kroger offered an Easter classic: “Sugar cured smoked hams for
Easter – 25 ½ cents a pound.
Back at Kresge’s, women would find fine fashionable
hats for only $1 and “girl’s Easter hats” were only 59 cents.
There were plenty of opportunities to present the finery. The churches
were open virtually around the clock from Good Friday through Easter
Sunday. Holy Saturday began with a blessing of the Pascal candle at 7 a.m.,
followed by Mass at 8 a.m. and then one of the most beloved of all
ceremonies – the blessing of the food baskets, which is still an honored
occasion.
Easter Sunday began with 5 a.m. Mass, along with Masses through the
morning. The highlight of the day was – and for many people still is –
Easter dinner, which usually includes ham, kielbasa, horseradish, colored
eggs, kaputsa bread, a butter lamb and whatever else could be loaded onto
the table.
Such was the fare in Hamtramck nearly a hundred years ago, and will be again this Sunday.