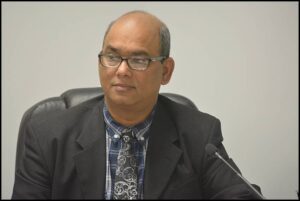 By Charles Sercombe
Tuesday’s election took an unexpected turn – even by Hamtramck standards.
On Monday, City Councilmember Mohammed Hassan received a “cease and desist” notice from the state Attorney General Office for his campaign activity.
Hassan has been promoting support for two city charter revision proposals that if passed would eliminate from the city charter the language of the establishment of the police and fire departments as well as their respective chiefs.
The letter accused Hassan, a Bangladeshi-American, of using social media to recruit people to help voters with their absentee ballot, and to also provide transportation for voters to turn their ballot into the clerk’s office.
This is a potential felony violation.
A spokesman for the Attorney General’s Office, Ryan Jarvi, told the Review that he did not know who filed a complaint, other than it came from the Secretary of State Office.
The Secretary of State Office has yet to return an email to the The Review for more information. The Review has since filed a Freedom of Information Act request to find out who made a complaint.
Jarvi also said that there will be a hearing on the matter but did not know when that would take place. 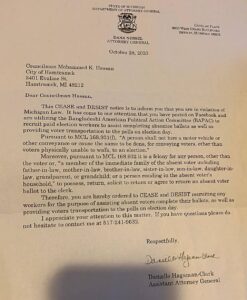 The Review received this photo of a letter from the state Attorney General Office to City Councilmember Mohammed Hassan.

Hassan told The Review he did not seek recruits for people to help voters with their ballots.
The two charter proposals in question, number 1 and number 2, have caused controversy in the community – mainly being discussed on social media. Hamtramck firefighters have been in the forefront in campaigning against the proposals.
If approved by voters – and it’s anyone’s guess how this issue will go – the council would then be tasked with coming up with an alternative way to provide those services.
Proponents of the revisions say it will save the city a significant amount of money, although no alternative plan was floated before the election to give voters and idea of what an alternative plan would look like.
Those opposed say it’s likely that whatever is proposed would result in inferior service.
In other election news, there has been talk and confusion over how long ballots can be counted before a presidential outcome is decided.
President Trump has said he will go to court right after the election to demand an end of ballot counting. Others have pointed out that in the past it taken days for many communities to complete ballot counting.
In response, a rally will be held this Thursday (Nov. 5) at Zussman Park, starting at 1 p.m.
The rally, billed as “Count Every Vote,” will feature Mayor Karen Majewski and City Clerk August Gitschlag who will speak on the importance of counting all the ballots.
In a press release announcing the event, organizers said:
“This year, Election Day will be more like Election Week. An unprecedented number of absentee ballots were requested and turned in, and these ballots will take a while to count. While it takes patience, we encourage the public to remain both active and faithful in the counting process.
“Unfortunately, some elected officials have attempted to discredit or create mistrust in the mail-in ballot system. The prolonged counting period could create an opportunity for individuals to breed distrust and sow discord in the process in order to undermine the validity of the results. That scenario could elicit a contested election.
“To demonstrate our commitment to a transparent and fair electoral process, we encourage community members to gather with us to thank our local election officials and to show our support until the very end.
“When everyone’s vote is counted and the will of the people is truly heard, we can have a better future for everyone. We want to make sure that every valid vote is counted, so that no community has their votes taken from them or their results undermined. …”
Also, so far this election day morning, lines at polling precincts in Hamtramck have been moderate. While it’s too early to tell, it appears most voters who are participating in this election have already voted by absentee ballot.
Over 5,000 absentee ballots have been returned so far to the city clerk’s office.
Hamtramck has a little over 9,000 registered voters.
Because of possible attempts at voter intimidation at various precincts across the country, federal monitors from the Justice Department have been dispersed today to monitor local elections, including in Hamtramck.
There have been no reports or threats to voters here, nor reports of outside challengers coming in.
Hamtramck has a majority immigrant population from Bangladesh and Yemen. Many of those voters do not speak English as a first language.
Posted Nov. 3, 2020 at 10:30 a.m.