EM says the city is poised to get emergency state loan 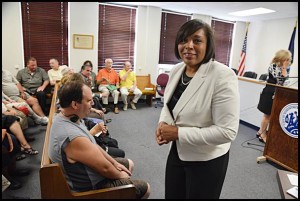 Emergency Manager Cathy Square says with the city’s financial picture much improved, the state will likely be willing to loan the city money to strengthen its pension system.

By Charles Sercombe
It looks like after years of asking for one, Hamtramck will be getting an emergency loan from the state.
Last week, after much discussion, the city council approved a request by Emergency Manager Cathy Square to apply for a $2 million loan from the state.
Square told The Review that she is confident the state will approve the request.
“We’re going to get that,” she said. “Our financials have improved greatly. That’s the difference.”
Square said she has to present her request to the state’s Emergency Loan Board. No date has been set for her meeting with the board, but Square said it should be soon.
The loan will be used to bring the city up to speed with its pension system, which is called MERS (the Municipal Employees’ Retirement System).
Without the loan, said City Controller Bhama Cairns, the city will be kicked out of the organization.
The vote by the city council for the loan hit some bumps.
Councilmember Anam Miah was upset that Square wasn’t present at last Tuesday’s council meeting to discuss the issue.
“She (Square) should be here tonight, explaining the plan that’s already in motion,” he said.
Miah also worried about getting the loan and then failing to pay it back. He said the state won’t hesitate to “come back at us hard.”
Mayor Karen Majewski said she found it “duplicitous” that the state will now OK a loan when the city’s finances are in good shape but would not when the city was in a financial crisis, before an emergency manager took over.
Councilmember Mohammed Hassan was the only councilmember to vote against a loan, saying it would be better to file for bankruptcy.
Getting the loan is one of the last things Square has to complete before her employment contract expires at the end of June.
Also on her plate is to hire a city manager, assessor and treasurer. She said a city manager should be in place any day now.