Federal money continues to have a local impact 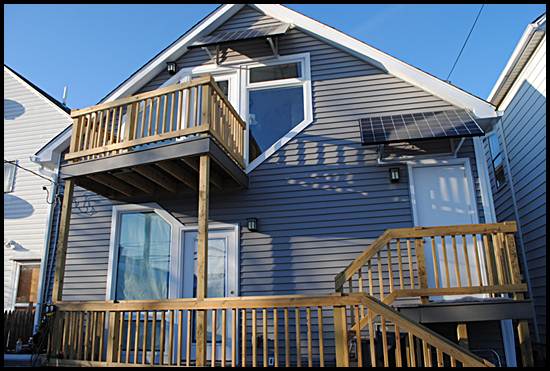 A rehabbed house on Commor St. received special treatment, and it is likely the most unique house in the city.

“The house was a disaster when we got it. It was just full of junk. And pigeons.”

That’s the way contractor Steve Hughes describes his most recent project, a house overhaul on Commor St.  Like many of the other recent renovations around town, it’s the result of funding from the federal government.

The money comes from the Neighborhood Stabilization Program (NSP) II, which was created to help cities maintain a stable housing stock in the wake of the Great Recession. Since being passed, in the past few years the city has rehabbed dozens of houses through the program.

However, the house on Commor is not like the dozens of other houses scattered throughout the city. Designed by Gina Reichert and Mitch Cope of Design 99, the space incorporates a number of innovations that makes it stand in a category of its own.

From the outside, other than new siding the differences aren’t immediately perceptible — from the front. Around back it’s a different story, as six solar panels protrude from the side and roof and provide auxiliary power to the house.

Moreover, specially-designed windows allow for sunlight to enter the house and provide solar heat, further offsetting energy costs. And though it can’t be seen, insulation in the walls and ceiling and keeps the heat from getting out.

Inside, the house looks more like it belongs in the suburbs than Hamtramck, and that’s not just because of the whitewashed walls and pristine appliances. One standout feature of the house is a custom-built staircase smack dab in the middle of the floor plan — which, for anyone familiar with the layouts of houses in Hamtramck, is a pretty impressive feat.

The rest of the house is pretty pristine, too. Its two full bathrooms feature funky tile work coupled with the home’s original tubs, and the fixtures throughout are second-to-none. Hughes’ construction team even went the extra mile and provided better-than-needed appliances and cabinetry from Ikea.

Overall the total cost of the project was $250,000, though the house will be sold to plaintiffs of the R-22 lawsuit for its appraisal value, estimated to be about $70,000. And while a quarter-of-a-million dollars may seem like a lot of money to spend on one house, Hughes sees things from a different perspective. To him, the money is well spent because it is put back into the local economy and the improvements to the house increase the values of houses surrounding it. 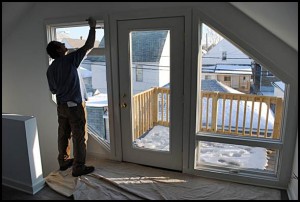 At this rehabbed house on Commor St., specially-designed windows maximize the amount of light entering the house and provide solar heat. Densely-packed cellulose insulation in the walls and ceilings then helps keep the warm air inside.

“Think about it — everyone that worked here got paid, and, for instance, when they got hungry they got something locally. It’s not like the money disappears — it circulates back into the economy,” he says. “And even after years of vacancy and then being torn down to the bare studs, I don’t know if there’s a nicer house in Hamtramck now.”