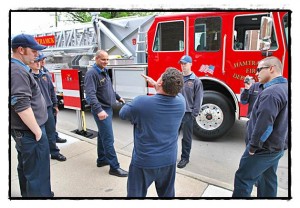 Hamtramck firefighters learn how to operate the department’s new aerial ladder truck from an employee (center) of the truck’s manufacturer.

If you run into a Hamtramck firefighter this week and he has a big grin, be sure to say congratulations.

No, it’s not about someone having a baby.

The Fire Department did welcome a new member to its family this week: A brand-spanking new Sutphen aerial ladder truck, weighing in at a few tons.

The truck will replace the department’s 40-something-year-old aerial which will be turned in to be scrapped out.

On Wednesday, firefighters began training, and loaded the truck up with hoses.

“It still has that ‘new truck’ smell to it,” said one firefighter.

The community can thank the department for some skillful grant writing which snagged a little over $700,000 from the federal government. Just like the old truck, the ladder on this rig will reach the top of the Senior Plaza building. The ladder is actually 10 feet longer.

And get this, the ladder actually is recycled from an older vehicle – that’s how well built it is.

And Hamtramck’s old ladder will also see new use in another truck.

A Review reporter was given a lift up the ladder, and it can honestly be said it’s a quick and smooth ride.

(Editor’s note: This reporter will easily experience the heebie-jeebies at the height of a one-story house.

Despite this semi-fear of heights, there was no case of vertigo on this ride.)

This is the second new truck the department received, again thanks to good grant writing and the largesse of the federal government. The first grant was worth $200,000, and if you add it all up, Hamtramck’s Fire Department is looking like a million bucks these days. 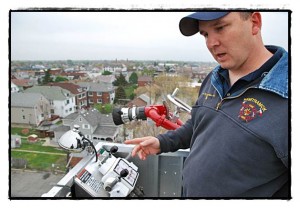 Eight stories up in the air.