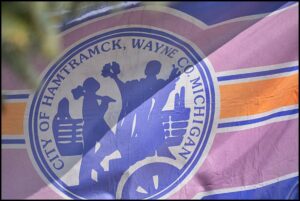 You can show your civic pride with your very own Hamtramck flag. Hamtramck lapel pins are also available for purchase – all at the city clerk’s office in city hall.

By Alan Madlane
Want to show your Hamtramck pride?
If you’re a Hamtramckan, of course you probably already do, on a near-daily basis. But here’s something to add to your Hamtramck swag: the city is selling city flags (yes, we have our own flag) and city lapel pins.
They are available in city hall through the city clerk’s office.
We asked City Manager Kathy Angerer to elaborate on the promotion.

Review: Let’s start with the city flag — how long has there been a city flag, and do you know anything of the story behind it (it’s design/designer)? Was the design updated at all?
Angerer: The flag dates to 1971, in preparation of the city’s 50th anniversary in 1972. Michael Balabuch, a St. Lad High School senior at the time, designed it, and won the contest held by the local chamber of commerce.

Review: Is there an official size for the actual city flag? Are the ones that people can buy for $40 that same size then, or not?
Angerer: There is not an official size. The flag that is for sale is 2×3 feet.

Review: When did the city begin selling the flags and pins?
Angerer: We purchased and began selling flags in 2021, and pins in 2013.

Review: It’s a good way to at least bring a little bit of extra cash into the city coffers, right? Has it been popular yet, or is word still just kind of getting out there still?
Angerer: People are buying them! We are not making a profit doing this. It is being made available for those that want to display a flag in their home, give a gift to a relative, or who otherwise enjoy supporting Hamtramck and sharing their community pride.

Review: Anyone famous order one yet? Are most of the orders coming from people within the city, or outside of it, or is it about even, would you say?
Angerer: Local elected officials and residents are the individuals who have purchased so far. I display one in my office!!

Review: The city pin – is that a new item? If so, who designed it?
Angerer: The pins were originally designed and purchased by former Councilman Robert Zwolak. He loved to give them out to visitors, to share in Hamtramck pride.
Former Police Chief Max Garbarino carried on the tradition by ordering them and selling them from the police traffic office, starting around 2013. We now have them available at the city clerk’s office for purchase.

Review: Who set the pricing on these items? Did any of this have to go through city council, or not?
Angerer: They are sold at cost. We order in small batches so that we have them available as needed. The city is not supplementing the cost or making a profit. It is to promote Hamtramck pride.

Review: What are the ways, and where are the places, these excellent items might be obtained?
Angerer: Flags and pins may be purchased Monday-Thursday, in person, from 8 a.m. – 4 p.m. at the city clerk’s office. If someone wishes to order by mail, we are happy to accommodate their order.

Well, there it is. So what are you waiting for? Get your flag and pin now while they last.
Posted May 13, 2022

One Response to Fly your Hamtramck flag high