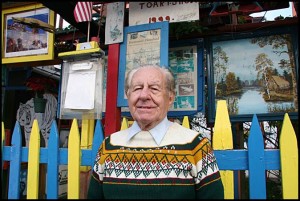 Celebrated folk artist Dmytro Szylak, the creator of “Hamtramck Disneyland,” died on May 1. The artwork attracts visitors from all over the world.

By Charles Sercombe
His whimsical inspiration has attracted thousands of visitors to Hamtramck for over 20 years.
Dmytro Szylak, the creator of “Hamtramck Disneyland,” died on May 1 at the age of 92.
For decades his self-created collection of whirligigs and found objects, which tower over his house and next-door on Klinger, has attracted visitors from near and far.
On any given afternoon it is not unusual to see a gathering in the alley behind Szylak’s house of students or visitors from overseas viewing his creation, which he continued to add on to over the years.
It was — and still is — customary to pose in front of this giant artwork and have your photo taken, or as they say today: a selfie.
Szylak began assembling the piece in the early 1990s. It eventually grew to a proportion that caught the attention of city code enforcers who periodically threatened to tear it down.
It probably isn’t easy either living nearby Szylak’s house. The many whirligigs loudly clang as the wind blows, and at night, it turns into a festival of lights.
He called the artwork “Hamtramck Disneyland.”
As the years went by, there were fewer and fewer threats from the city as the number of visitors increased and national and international newspapers and magazines pumped out stories about Szylak and his artwork.
Scores of documentaries were also produced. Szylak became an internationally-known folk artist, and Hamtramck became a destination point thanks to his exposure.
If you lingered long enough, chances were Szylak would come out of his house and chat, sometimes asking for a donation of $1. Often you could catch him high up on a ladder tinkering with the elaborate structure, adding new items and shoring up support beams.
When visitors stopped by, he always had a kind greeting and a smile. He seemed never to tire talking about his work.
Szylak was an immigrant from Ukraine and worked at GM for 30 years until his retirement.
In a short documentary by filmmaker Terry Murphy, which is posted on The Review website (www.hamtramckreview.com), Szylak has this to say about his creation:
“After retirement, I think about what I’ll do. I make a hobby on two garages, on the roof. A lot of people come over. All countries, all world, (come) to see my Disneyland. And a lot of people say, ‘Incredible.’ Everybody is happy.”
Asked what should happen to his creation after his death, Szylak said:
“I don’t know what happens when I no longer live … Maybe (it) will stay forever. Maybe it depends how people like it.”
Mayor Karen Majewski hailed the artwork as a “landmark and tourist attraction, as well as an expression of Mr. Szylak’s life and artistic vision.”
Szylak is survived by three daughters and a grandchild. It is not known what his family plans to do with his creation.
If his survivors aren’t sure what to do, Mayor Majewski says the city is ready to help.
“(We’re) committed to preserving this jewel, and the artist’s legacy in Hamtramck,” Majewski said.
Chris Schneider of Hatch, a Hamtramck art collective, said there are plans being drawn up to keep the artwork in Hamtramck.
Szylak’s wife, Katherine, died in 2008. They are buried in Mt. Olivet Cemetery.

2 Responses to Folk artist who created ‘Hamtramck Disneyland’ has died