For Hamtramck, MLK Day brings some closure to housing case 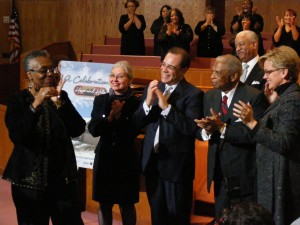 By Ian Perrotta
Review Staffwriter
This year, Martin Luther King, Jr. Day was extra-special. For the City of Hamtramck, it marked an opportunity to move one house closer to resolving the 40-year-old Garrett v. Hamtramck lawsuit. And for Sallie Sanders, it marked an opportunity to finally come home.
Sanders’ family was one of the 144 plaintiffs who sued Hamtramck for racial discrimination when they were unjustly forced to move under the guise of urban renewal. Though that case was settled in 1980, when the city agreed to develop 200 family units as compensation for the racial discrimination, construction has long been delayed because of disputes over what type of housing to build and funding.
Now, thanks to a partnership between the city, Wayne County, and the Michigan State Housing Development Authority (MSHDA), the case should soon be closed. According to MSHDA, to date more than $40 million has been invested to develop, renovate and construct hundreds of new homes in Hamtramck. And with the $13.9 million that was recently awarded to the city by HUD, it looks like everything could be resolved by 2011.
MLK Day was an appropriate day to make right something that had so long been wrong. Beginning with a celebration of Dr. King’s birthday at Corinthian Baptist Church, notable figures including Judge Damon J. Keith (who presided over the housing lawsuit from its inception), Gov. Jennifer Granholm, Wayne County Executive Robert Ficano and Hamtramck Mayor Karen Majewski all weighed in on the historical significance of the case. Many echoed the sentiments of Dr. King, who made a name for himself because of his tireless fight for justice, harmony and equality.
“The relevance of [Dr. King’s] message can be seen today here in Hamtramck as new homes are returned to those who suffered from discrimination in the past,” said Granholm.
The highlight of the day’s events came when Gov. Granholm presented Sanders with the keys to her new home. The visiting dignitaries then went to the house on Dequindre for a tour and ribbon cutting ceremony. And 40 years after being run out of her home by the government, a different group of officials welcomed her back with open arms and smiling faces.
“I’ve got my stuff packed up and I’m ready to move in,” said Sanders.