For now, emergency manager will remain in charge 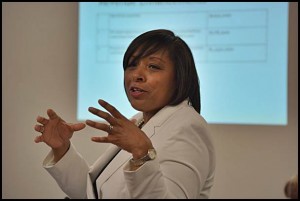 Emergency Manager Cathy Square will still in be charge for at least another couple of months while the search for a city manager continues. Square had planned to leave her post on June 30.

By Charles Sercombe
The search is officially on for Hamtramck’s new city manager.
This week the emergency manager contracted with the Michigan Municipal League to head hunt for the city.
Emergency Manager Cathy Square said the state of Michigan is covering the $10,000 cost for the search.
If the last search is any indication, it could take two or three months before the final candidates emerge. During the last search, Square allowed the city council to question the top-two candidates for the job.
The ultimate decision on who gets hired is up to Square. Square said she was unable to reach contract terms with either candidate. She said they both wanted generous payouts in case they were fired before their contract expired.
In the meantime, Square said she will remain on the job despite her plan to leave by June 30.
By law, Square can stay on for another six months, at which time the city council can vote to remove her. The governor, however, can choose to appoint another EM if he thinks the city is still not ready for a return to local control.
But local control won’t be like it was before an emergency manager came to town. A financial review board will be overseeing city purchases and contracts for as long as the state wants to.
During the past year Square has, for the most part, restored the city’s financial picture. But there is a lingering problem with funding the city’s pension with the MERS organization.
Square is still negotiating terms with the pension distributor. Square managed to get a state loan for $2 million to bring the city up to speed with MERS, but it’s the yearly payments going forward with the organization that has been a hold back for the city.
In short, what MERS is demanding will send back the city into another financial deficit in the coming years.
Square said she needs a city manager well versed in pension matters and also in handling capital improvement projects, such as sewer and street repair.