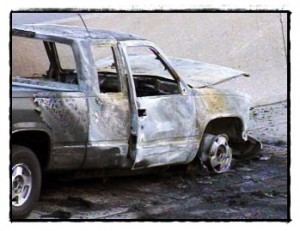 A suspected case of road rage tied up southbound traffic on I-75 for over four hours Monday afternoon.

Michigan State Police are investigating the shooting of a pick-up driver on Hamtramck’s portion of I-75. The victim, who the state police are not identifying, was shot at least twice — through his lungs and spine.

The driver lost control of his car when his fender partially fell off and rubbed against a front tire, which in turn started a fire, said Hamtramck Fire Chief Steve Paruk.

Hamtramck firefighters were called to the scene but were delayed because they had to first drive up to 6 Mile Rd. and double back south of Caniff. Paruk said freeway fires are potentially life-threatening for firefighters.

“A lot of people don’t see our flashing lights and pull over,” Paruk said.

The shooting/accident happened around 4:45 p.m., during rush hour traffic. Southbound traffic was backed up past the I-696 interchange.

State police say the victim is in critical condition. No arrests have been made, and it was unclear at press time if the victim was able to provide details of the shooting or a description of the shooter.