Grillin’ and chillin’ at the Planet Ant 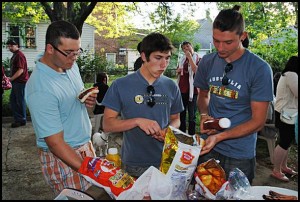 Stop by Planet Ant Theatre on Monday evenings for a backyard barbecue featuring good people and plenty of food produced by Michigan-based companies.

Chances are if you’ve driven down Caniff you’ve noticed the Planet Ant Theatre. And while it’s hard to miss the bright purple building across from the library, you may not know about the party going on out back.

That’s right – Planet Ant stands out not only in its color but also through the variety of entertaining shows, plays and other community driven events that it provides, especially on Monday nights. Starting around 7 p.m. the theater hosts a complimentary barbecue before Improv Night at 8 p.m.

Planet Ant Theater has arranged the cookout for the last three years and every year it grows in popularity. Featuring perfectly grilled Kowalski hot dogs, crisp Faygo sodas and crunchy Better Made chips, it’s no surprise the affair fosters a more comfortable and lively experience later in the evening. 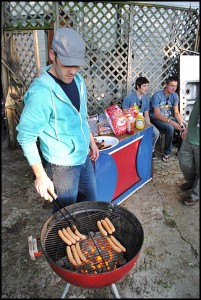 Improv Night itself is based almost solely on audience participation. Improv skits are first performed by the Guest Team, which consists of local participants and comedians. After that the Home Team takes the stage and steals the show.

Audience members in attendance are also encouraged to sign up to partake in the lively improv games and scenes staged throughout the night, but there’s no pressure to perform. You can also just attend and have a great time while wining and dining Hamtramck-style.

Though a minor setback occurred recently when the theater’s grill was stolen, as anyone in the business will tell you the show must go on. Thanks to a friendly neighbor with an extra grill, the barbecues can do just that.

“We had to improvise,” joked Managing Director Jamen Spitzer. “But the Ant has always been a place where people can come, hang out and have a good time, and the only thing that’s going to change is that it’s only going to get better.”

Planet Ant Theatre is located at 2357 Caniff and hosts a number of shows and events throughout the year. Improv Night is just $5 and there’s nothing else to do on a Monday, so what are you waiting for? For more information call (313) 365-4948, visit www.theplanetant.com or check out their Instagram and Twitter pages at Planet Ant Detroit. 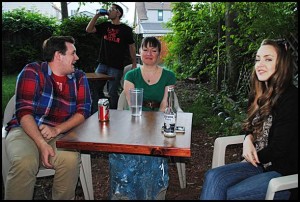