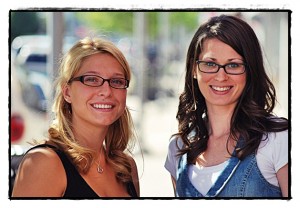 Who they are: Kathleen Bittner and Rachel Renee Srodek …
Well, if anyone in this town qualifies as a mover and/or a shaker these days, it has to be these two hometown gals, who have jumped into the void left by the budget-related elimination of Eve Doster’s position as the city’s Events Coordinator and taken it upon themselves to try to preserve the annual Hamtramck Labor Day Festival. We caught up with the ebullient pair in the back room of Srodek’s Market, where Rachel was also running the shop.

You two seemed to blow onto the local festival organizing scene like a whirlwind. So, I suppose the logical first question is, how did you both get into this “mess”? Were you friends from before this? How long have you known one another? Have you ever attempted anything of this scope before?
Kathleen: Well, when we heard it (the festival) wasn’t happening, I said, “Rachel…”
Rachel: It’s a tradition. We couldn’t let it not happen!
Kathleen: And no, we’ve never attempted anything of this scope before. Actually, I know Rachel because my brother is Rachel’s husband’s best friend. In any case, we figured, if the festival can be done for 30 years, and it’s getting more and more well known, then we should try to make sure it continues. She’s a no-B.S. person, easy to work with.

In recent years, the duty of organizing the Labor Day Festival fell to Eve Doster as the city’s Events Coordinator. Did you ever get to meet her? Did she offer any advice, or otherwise give you any ideas as to how to go about setting this year’s festival up, or have you simply proceeded more or less from scratch?
Kathleen: We knew her very well. She’s been totally supportive.
Rachel: Yes, Eve’s been really helpful with anything we’ve needed. Also, Darren (Grow, head of the Hamtramck DDA) and George Kristy, who ran it for several years, have made themselves very available to us.

Perhaps you had some connections to the entertainment world that helped you to start setting up the music lineup, for example? If so, how did you come by these connections? Or if not, then how did you wriggle your way into the world of band bookings, managers and so forth?
Kathleen: No! We had no connections whatsoever! Once we decided on the theme of “Homegrown Hamtramck,” we went online to see who the famous Hamtramckans were…
Rachel: On the City’s website…
Kathleen: … there was Rudy (Tomjanovich, former NBA player and coach), but who really made sense was Mitch Ryder. So we dug around and found out who his booking agent was. And he agreed to come and play.
Rachel: We called some other better known acts too, and they all talked to us, but they wanted more money than we could afford to pay.

So, is the music lineup set now?
Rachel: Yes, it is.

Okay. Do you foresee keeping the general plan for the festival similar to other past festivals, or have you consciously tried to, if not distance it, then at least make it different, from, what’s come before? If yes – in what ways? What will we see that will be new? Or if the answer is that you decided NOT to change anything, then why not? Tradition, simplicity, or…?
Kathleen: A lot will stay traditional, for example it will be in the same location, we have the same company providing the rides that has been doing it for years. One change we focused on was to try and make the look of it more inviting.
Rachel: We’re trying to add more greenery, more seating. And we definitely wanted a dance area in front of both stages.
Kathleen: We went around to other festivals and hand-selected some vendors to be part of it. So the booths will be, in some cases, more high-end merchandise.
Rachel: Except for the glow necklace one. (Laughs)
Kathleen: Oh, right!
Rachel: But in general…

It certainly isn’t cheap to put on a festival. How is it getting financed? Surely you’re not paying out of pocket? Do you have sponsors?
Kathleen: So far we’ve only spent $60 out of pocket. We definitely do have sponsors. American Axle is a major one. Franklin Electric. I hope I don’t forget anyone! Dan Zwolak has helped with creative marketing.
Rachel: He runs a company called Seeds Marketing (out of Madison Heights; see Facebook – Ed.)
Kathleen: He’s also our webmaster, although the website – Hamtownfest.com – won’t really be up for another week or so.

This is a big undertaking, as I’m sure I don’t have to tell you. Most people won’t realize how much goes into putting on something of this magnitude. For example, I suppose there’s already a procedure in place for easily securing any necessary permits, etc.?
Kathleen: The city has an established procedure, a timeline. Within a given time, you have to, for example, line up the DPW, the clean-up crew, electrical people, police/fire, EMTs, everyone. We’ve been working with Ed Norris (the City Clerk), William Cooper (the City Manager)…
Rachel: Everybody’s been wonderful and available!

Anything else you’d like to add?
Rachel: This year the festival will be three days, Saturday, Sunday and Monday, Sept. 4 through 6. We did away with Friday.
Kathleen: It was the least profitable day, the least attended in general. I should mention that this festival has been gaining in popularity though – Mike Szymanski heard about it all the way up north.
Rachel: There’ll be some fun events leading up to it too – there’s a Road Rally on Sunday, Aug. 8, from 3-6 p.m.
Kathleen: It’ll start in the Queen of Apostles parking lot. Fifteen dollars per person, or $50 per car load. Also, another fundraiser is a fun run. There will be a 5K…
Rachel: … and a “Golabki” 1K.
Kathleen: We like the idea of “everyone just donate a dollar for every person in the city”!
Rachel: Well, it’d be nice to get both locals and some outsider people involved!

Last question: Will you do it all over again next year?
Kathleen: If it’s a success, if it can make money, or at least not lose money.
Rachel: We’ve got to try to keep it going.
Kathleen: But never again with only 10 weeks to put it together!
Rachel: Right!

2 Responses to Hamtown’s movers and shakers