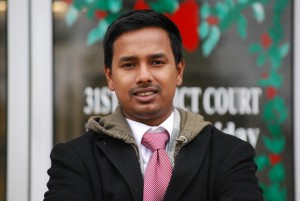 By Ian Perrotta
Review Staffwriter
In the Chinese Zodiac, 2010 is the year of the Tiger.
In Hamtramck, it’s the year of the Bengali Tiger, and his name is Kazi Miah. In addition to beginning a four-year term on City Council in January, Miah has also been selected as a 2010 Fellow for the Michigan Political Leadership Program (MPLP) at Michigan State University.
The MPLP was established in 1992 by the state’s political leadership at the onset of term limits and has since graduated over 400 students, including current Detroit City Council President Ken Cockrel Jr. and former State Superintendent Tom Watkins. According to the program’s website, the MPLP “recruits, trains, and inspires tomorrow’s public policy leaders, preparing them with vision, commitment and the skills for effective governance.”
The fellowship comes with a $12,000 scholarship to cover the program’s cost. Twenty-four students – 12 Democrats and 12 Republicans – comprise the program, which meets once a month at various locations throughout the state for a weekend of intense training on subjects ranging from media relations to bipartisan partnership and law writing.
This year wasn’t the first that Miah, who is 30 years old, applied for the program. Last year he made it past the preliminary selection process but did not make the final cut. Undiscouraged, he re-applied this year and was ultimately selected.
“Kazi Miah’s impressive electoral victory to the Hamtramck City Council, as well as his long-time service to the Bengali community, impressed the selection committee and elevated his application,” wrote Steve Tobocman, Co-Director of the MPLP, in an e-mail to The Review. “We believe that as Kazi learns more about the policy issues facing Michigan, about the political process by which candidates get elected, and more about how good public policy is developed across political, ideological, and other lines, he will develop into a leader not just for his own community, but for all of Michigan.”
Miah is the first person from Hamtramck and the first Bangladeshi to receive the award. He says he is honored and excited about it, and it’s not just him that will benefit, but all of Hamtramck.
“I’ll be able to take the things I learn and directly apply them to what I am doing,” he said, “so I think the community is the real winner.”
Miah also says he hopes he can inspire young people from Hamtramck to get more involved in local politics and public service.
“You don’t have to run for office to be a public servant,” he said. “You can be a police officer, you may become a fireman or a teacher. Even attending city council meetings or cutting your neighbors’ grass is a form of public service. There are plenty of things that ordinary citizens can do every day.”