Hamtramck voters at times at odds with state voters 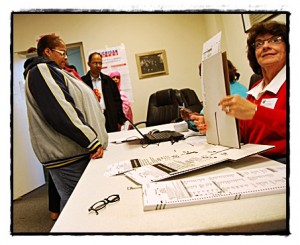 Hamtramck voters remained true to their Democratic Party roots on Tuesday even though it was the polar opposite of what a majority of state voters supported.

Virg Bernero, the Democratic candidate for governor, can consider Hamtramck a home away from home. He whipped his Republican opponent, Rick Snyder, by taking 86 percent of the vote.

Ah, but only in his dreams was such a victory statewide. He was trounced, stomped and kicked to the side in the election by a 58-38 percentage difference. Bernero was not the only Democratic candidate to be a victim of the Republican tidal wave.

Republican candidates now control the state’s legislature. Just how this will work to Snyder’s advantage will have to be seen. He ran as an outsider even to his own party.

And just how Snyder will handle cities like Hamtramck going through hard financial times is a big unknown. But that’s a story for the weeks to come.

In the race for Attorney General and Secretary of State, while Hamtramck remained faithful to the Democratic candidates, a majority of state voters didn’t have the same kind of love.

As for hotly watched Congressional races, Hamtramck voters were faced with only one race – the seat held by John Conyers. Conyers easily won his district, including Hamtramck.

In the state Supreme Court race, voters here split on the Democratic ticket. Incumbent Alton Thomas Davis got the top vote here, but the Republican-endorsed candidate, Mary Beth Kelly, got the second highest.

Statewide, Davis was booted out of office and Kelly and incumbent Robert Young won. Both benefitted from an aggressive advertising campaign. In fact, their names were sometimes the most visible out of all the candidates running for office in the area.

There was only one local candidate, Muhammad Alim, who ran for state Representative as an Independent. Alim was counting on the powerful Bangladeshi-American voting bloc to give him a shot.

The race for state Senator for this district also easily went to Democratic candidate Bert Johnson.

When it came to state ballot proposals, Hamtramck voters were in lockstep with state voters. A proposal to rewrite the state constitution was defeated, and a proposal to ban those convicted of a felony for violating the public’s trust while holding public office from running for office for 20 years after conviction was overwhelmingly supported.

Call it the Kwame Kilpatrick law.

The Wayne County ballot to renew a parks tax was also supported here as well as countywide.
Considering there were no local office or local proposal on the ballot, turnout was fairly good, with 2,847 voters participating. Out of those voters, 86 percent of them elected to vote a straight Democratic ticket.