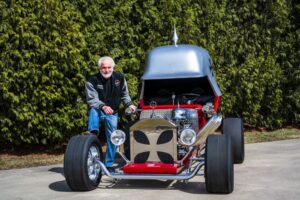 Custom car designer Chuck Miller poses next to his famous “Red Baron” creation. His work will be on display this Saturday at the Lincoln Park Historical Museum. Photo by Doug Coombe

By “Sailor” Rick Metcalf
Special to The Review
Have you ever marveled at those crazy chrome and wild-colored custom car creations at an Autorama?
How about built a plastic model kit or raced a Hot Wheels miniature version of one?
Chances are, you may have admired, assembled or even stepped on (ouch), a creation by Michigan native Chuck Miller, who will be celebrated at the Lincoln Park Historical Museum in an upcoming exhibit entitled “A Tribute to Styline Customs-Mobile Masterpieces by Chuck Miller” Aug. 14 through Sept. 18.
(For curious Hamtramckans, the Lincoln Park Historical Museum is a mere 20 minute drive south of here.)
Of the dozens of Miller’s creations, his most famous is “The Red Baron,” a custom (and drivable) show car, themed on a World War One German fighter plane, and the famous foe of Snoopy. It’s been winning award after award on the custom show circuit since 1969.
The “Red Baron” will be at the opening reception for the exhibit alongside a pair of “Zingers,” the “Super Vette” and the “Super Van.”
Like the “Red Baron,” the “Zingers” were initially model cars (by Monogram and Michigan’s MPC, respectively).
Miller’s “Zingers” had fiberglass bodies at 1:43 scale, with full-sized chrome-plated, supercharged and fuel-injected engines stuffed into the vehicles sitting on oversized shiny wheels and wide tires to complete the cartoon come to life look. 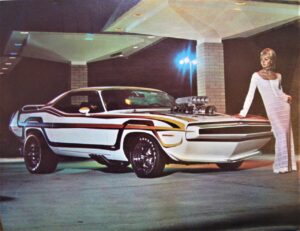 Miller, 79, is a Lincoln Park native (Class of ’61) spending most of his life Downriver, when at the age of 20, he took over a River Rouge bump shop (as auto body repair shops were called then), renaming it “Styline Customs” and, after returning from a stint with the Army reserves, hasn’t looked back since.
Along with the “Red Baron” and “Zingers,” he created the “Sonic ‘Cuda,” the “Fire Truck,” “the Woodburner” and the “Crater Raider,” gracing the custom car show floors throughout the 60’s and 70’s.
On the corporate side, he’s worked with P.P.G., and helped lead the charge with Chrysler’s colorful and memorable Plymouth “Rapid Transit System” muscle car promotion when it hit the road, building a custom Road Runner and ‘Cuda in 1971.
For almost 30 years, he’s been the engine behind the “Cavalcade of Customs” a feature of Autorama, where Miller chooses 10 customs to be displayed — never a repeat.
Also at the opening of the exhibit will be Bob Larivee Sr., the founder of the modern Autorama, and producer of over a thousand hot rod events and shows that have help propel Detroit (it’s not always about Los Angeles) into a hub of metal flake paint and deep chrome.
He will be signing his new book “Hot Rod Dreams — Show Cars and Culture” along with his exhaustive first book “Hot Rod Detroit: A Complete History of Hot Rodding in the Motor City.”
D.J. Savage Matt and Margaret Doll Rod will be playing the custom Hallmark “Red Baron” electric guitar.
The Third Man Records Van will also be on site, and copies of the limited-edition exhibition poster by Glenn Barr will be for sale.
“A Tribute to Styline Customs-Mobile Masterpieces by Chuck Miller” (Aug. 14-Sept. 18), at Lincoln Park Historical Museum, 1335 Southfield Rd, Lincoln Park. Wednesday and Saturdays 1-6 p.m.
Opening reception, Saturday Aug. 14, 12- 4 p.m.
Visit www.facebook.com/chuckmillerstylinetribute or www.lphistorical.org for further information.