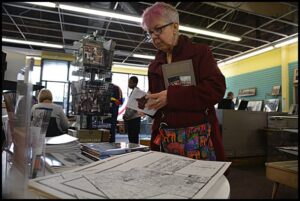 The Hamtramck Historical Museum hosted several projects in the past year, but of course COVID curtailed some events.

So what’s happening now, at the local museum dedicated to the city’s history?
Well, for starters, Hamtramck’s Historical Museum had a bit of excitement on Jan. 10, when a French reporter and their cameraperson from CANAL+ television network, based in Paris, came in for a look-see.
CANAL, perhaps a familiar name to filmgoers as a distributor of French cinema, was focused on the city’s background as a haven for immigrants, and the resulting diversity. The crew reportedly seemed taken with the recently completed “Coming to Hamtramck” mural.
The City of Hamtramck is, of course, named for Col. Jean Francois Hamtramck, born in French Canada in the mid-1700s but who died and was originally buried in Detroit in 1803, and who was then evidently exhumed and placed in a grave in Veterans Park.
The CANAL+ program will first air in France, but then is supposed to become available on YouTube after that.
Bear in mind it will still be in, you guessed right, French.
Beyond that, the museum enumerated several projects or plans for the 2021.
It was noted that next year, 2022, will be the 100th anniversary of the official formation of the city of Hamtramck, before which it was classified as a village and township. It is fervently hoped, by many, that coronavirus control protocols will enable a proper level of celebration by then.
February should be an active month for the museum: A new podcast studio is expected to begin operations, and the 2020 annual reports for the Museum, the Historical Commission and the Friends should be complete and ready for viewing on the website (hamtramckhistory.org).
Newly planned flooring for the main gallery should have formal plans in place by spring.
And, in an especially exciting development, the museum is in the process of helping to draft both history and art curricula for the Hamtramck Public Schools.
We’d say that’s a nice feather in the museum’s cap.
The newsletter reminded interested parties that the museum had sent out annual membership renewal notices. Some have been returned already, and the hope is that more will soon make their way in.
Finally, the newsletter contained a heart-felt short message from museum director and local historian par excellence Greg Kowalski, briefly detailing the museum’s journey over the past difficult year.
In short, Kowalski called 2021 “perhaps the most important year (for the museum) since (it) opened in 2013.”
“By this time next year, I’m hoping to look back on a litany of accomplishments,” Kowalski enthused.
We’re with him all the way on that, and wish the museum “Bon chance” – or “Good luck,” to all you non-French speakers.