‘Homeless by Choice,’ but he dreams big for others 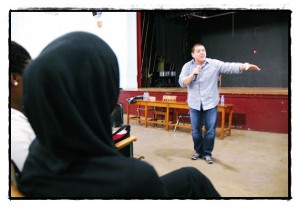 Roy Juarez Jr. is a medium-sized young man. But he dreams big.

Speaking at Hamtramck High School recently, Juarez detailed his strange trip: homeless (along with his two younger siblings) from the age of 14, after having been on the run from an abusive father, and then having his mother agree to marry her protective policeman boyfriend who suddenly “didn’t want (her) kids.” (They would later reconcile).
He now chooses to go out on a tour of the country, without promise of lodging, to tell his inspiring life story in schools. He calls it his “Homeless by Choice” tour.

His narrative jumps around a bit, perhaps reflecting the way he once had to jump from temporary home to temporary home, but he speaks with a passionate energy.

The students sat, quietly and respectfully; most, no doubt, absorbed in his tale. Whatever anger he once had at his parents, or others, he seems to have rechanneled into his positive work.

And his best quotes seemed to hit home.

“We can’t push away the people who want to help us” through our anger at the world, Juarez said.

He spoke of the power of positive dreams, couching it in terms of the many losses so many at-risk youth experience: “The gift of dreaming is a gift no one can take from you.”

Admitting that he didn’t know these young people seated before him (nor pretending to), he said, “We have control over how we let situations affect us: Bitter, or Better. Please – choose to be Better.”

He had almost certainly delivered these lines before – in fact, probably twice before, just counting that day. You see, he had appeared twice earlier in the day at Kosciuszko Middle School — to deliver his inspiring message there, as well.

Even the tears he shed during talking about how his little brother and sister found homes, while he could not — while probably shed before — seemed genuine.

We must be the change – the change that we want to see, he intoned. We need you to love yourself, he reminded. Not one student offered a smart-alecky rebuke. They were, it seemed, on his side.

Finally, toward the end of a roughly 45-minute journey, he stressed two more points.

“Understand how valuable your education is,” he concluded; “understand the opportunity you have before you.”
And?

“Be nicer to one another.” He had, he said, forgiven his mother for abandoning him in favor of the security of life with a policeman who initially didn’t want kids. He could separate the person from her own fearful poor choices.
Even his (now) stepdad, he said, had come around. He didn’t mention whether his relationship had rekindled with his birth father.

But his message still rang in the air, like a bell.

“Don’t give the future away,” he begged, “because it’s yours.”

And even if there were some of the usual blustering shenanigans outside after the final bell did indeed ring, you can’t help but think that a lot of these kids — had they thought back on their school day later that night, while in bed — will remember the poignant story of one Roy Juarez Jr.

Roy’s business card states that he is now affiliated with America’s Business Leaders. He is on Facebook, Twitter and Youtube. “Liking” him on Facebook will help, he says, toward his goal of getting some possible corporate sponsorship for the next time he tours the country, beginning again in August after he takes a breather from the current one, set to wrap up in May.