How to fight blight? Find out where it is and make a map 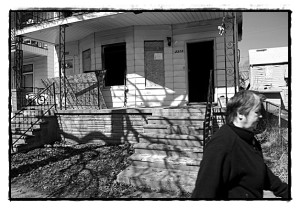 An organization will be hitting the streets this coming week to locate and map all blighted properties in Hamtramck. That information can then be used to help secure funding to clean up the city. File photo

By Charles Sercombe
If you see a stranger on your street taking a photo of a house or lot, don’t be alarmed.
By next week, if all plans go ahead smoothly, volunteers will be spreading throughout the city to map all blighted properties.
The work is part of a larger effort being performed by the Motor City Mapping Project, which has been putting together a similar map for Detroit.
The group presented its proposal at Tuesday’s city council meeting, but since there were not enough councilmembers present for it to be an official meeting, no vote could be held to approve Hamtramck’s involvement.
However, a special council meeting was scheduled for Thursday evening, after The Review went to press, and it was expected the project would receive the go-ahead from the city.
(Editor’s note: The city council did approve the project.)
There are about 7,000 properties in Hamtramck, and this map will focus solely on blighted ones. The project is being funded through the Kresge Foundation and Skillman Foundation.
Volunteers will be taking photos of each property in the city and will note its address and what shape it is in. They will be wearing yellow construction vests and will have an ID visible.
Kathy Angerer, the city’s Director of Community & Economic Development, welcomed the project, saying it’s “one more tool that can be used by the city of Hamtramck in our continuing plan to fight blight and to meet our goal of a safe and clean Hamtramck.”
The information collected will be available for the public to view online at www.motorcitymapping.org.
The public will also be able to give updates of properties, such as if they get worse or if there is an improvement made. Photos of the sites will be taken only from the front side, facing the street.
The survey has also been extended to Highland Park to include the entire area within the borders of Detroit.