Is Hamtramck coming closer to looking like a suburb? 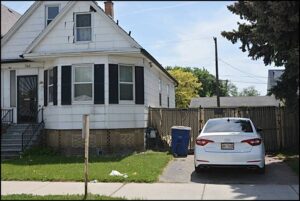 The city will now allow homeowners to install a driveway, as long as there is enough space and other requirements are met. Newly built houses can now have enclosed porches. Not everyone approves of these changes.

By Charles Sercombe
Culture clashes in Hamtramck are not unheard of.
But this time we’re not talking about ethnic differences, although that does have bearing on the issues coming up here.
We’re talking about some folks who want a more suburban look to the city, versus those who want to preserve the city’s historic look.
And this design dispute is nothing new.
There has long been some Hamtramck residents wishing to relax the city’s zoning ordinances to allow things like driveways and enclosing their front porches.
In the 1990s, the debate became heated when the concept of “New Urbanism” became popular.
Hamtramck was a prime example of what was old has become new again.
For example, New Urbanism advocated building houses side-by-side, and close, and right up to the sidewalks.
In the suburbs, it’s all about spreading out: houses spaced far apart, and set back from the sidewalks.
Recently, these issues reared their heads back up, and this time, the city council agreed to some exceptions for allowing driveways to be installed, and porches to be enclosed.
As for an ethnic aspect of this, the pro-driveway and closed off porch support came from the Yemeni community.
Those arguing against it were the white progressive community.
We have asked two residents, both of whom are on the city’s Zoning Board of Appeals, to explain their sides of the debate.
We’ll start off with former school boardmember Nasr Hussain, who is in favor of what is called “curb cuts” – which allow some houses located on two lots to install a driveway – and he is also for allowing houses that are built new going forward to have the option to close off their front porch.
Here’s what Hussain had to say about porches:
“It’s time for removing the ban on them for the following reasons:

o “People no longer socialize on porches. They do mostly on social media.

o “They have nothing to do with safety: many cities allow them, and fire departments don’t mind their existence.

o “The makeup of the community has changed during the past decades, and many people prefer the privacy of an enclosed porch to an open one.

o “Enclosing the porches provides the residents with a safer environment, and less theft of packages left by delivery drivers.

o “Enclosing a porch extends their useful purpose all-year round, instead of just for the summer. People will use them as storage spaces for their bikes, shoes and many other things.

o “Enclosing the porches as a sunroom will provide the residents with a warm place to sit during the cold season.

o “This issue has been brought before the zoning board many times, indicating that it’s time to update the code related to it.

o “Enclosing the porches, which usually is done with insulation, helps in the saving of energy in most Hamtramck houses that don’t have insulation because of their age.

o “Quite a few houses have been enclosed in the city without the code being enforced against them, which raises the issue of ‘Selective Enforcement,’ which we’ve been complaining about for a while. Removing this restriction will insure more fair enforcement.”
As for allowing curb cuts for driveways, Hussain lays out his argument for it:
“There are two main reasons:
“First, it doesn’t make any sense to prohibit them, and most cities in Michigan allows them.
“Second, and more importantly, to prevent selective enforcement. Some people are allowed to have them while others aren’t which, by the way, is currently happening with another law preventing parking on unpaved lots.
“People with no connections, or immigrants, are cited for parking on unpaved lots, while some dispensaries are allowed to park on them without fear of being ticketed (Quality Roots and Puff). Photos attached. Hopefully we will work on repealing this ordinance item soon to prevent it from being selectively enforced.”
Thomas Habitz, Jr. took on the issues in one swoop. Here is what he had to say about why he is opposed to both concepts:
“The City of Hamtramck is under assault. Not by anyone purposely plotting its demise, but by its own residents and leaders, who are falling into the trap of pushing for, or allowing, patterns of suburban land use and function.
“Why is it a trap?
“Because our city’s financial and social viability are on the line, and recent decisions are moving our community toward failed models that emphasize cars over people, and away from those that have capitalized on their urban qualities to become highly desirable places.
“Recent amendments to our zoning ordinance that have expanded the ability of residents to create new driveways, and to enclose their porches, are symptomatic of this trend, but they are not isolated examples.
“The past decade in our community has seen lax enforcement of site plans, missed opportunities to calm traffic and add pedestrian and bike infrastructure, and countless attempts to shoehorn in suburban-style development.
“It is a source of disappointment, but at the same time hope, that the blueprint for a more vibrant future that builds from the city’s assets exists in its official master plan. We simply must get more serious about investing in its solutions.
“We can do better planning in Hamtramck than doing away with a sensible provision — a ban on new ‘curb cuts’ — that protects our sidewalks.
“It is a planning axiom that you get the kind of activity that you build for. Widening streets, laying new driveways, adding parking lots in front of commercial buildings — all these activities add cars and traffic, but they make places weaker financially and environmentally, and more socially distant.
“If you build for people, you get exactly that, people who can move safely and comfortably about.
“Hamtramck’s successful future will include businesses that are locally owned being supported by local citizens, a vision only likely to be realized by maintaining its walkability.
“We can do better planning in Hamtramck than loosening our design standards for residential front porches.
“Porches, which have served the city’s residents well for decades as places to relax, cool down, and see and talk to neighbors on an even plane, are changed almost completely in their function if they are closed instead of open.
“It is no wonder that, as cars grow larger and more dominant, and people disappear from sidewalks, that a cry comes from residents wanting to put up new walls, since the old view from and experience of a front porch is not as pleasant as it once was.
“It is easy to see how these things work together, where one hasty decision or negative trend begets more, furthering obscuring the fact that we have all the ingredients to thrive: a well-planned city, an exemplary public realm, and most of all, ourselves.
“Planning and zoning decisions that put people first will always be a winner, especially in Hamtramck.”
Well, those arguments leave plenty to ponder.
The Review would like to hear what others think about these issues. Send us an email at: news@thehamtramckreview.com.

4 Responses to Is Hamtramck coming closer to looking like a suburb?