Is the city facing a financial ‘doomsday’? 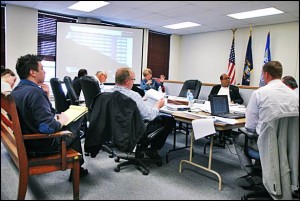 Word to the wise for Hamtramck city employees: Don’t make any big purchases.

That’s because, unless the city receives a loan from a bank or the state, city employees can count on going without a paycheck by sometime in May.

According to Acting City Manager Erik Tungate, there will be enough cash on hand for this week’s payroll and maybe the next one in mid-May. But by May 23, forget it.

That was just some of the bad news the city council heard at a special budget work session on Tuesday evening.
Tungate didn’t shy away from saying just how bad things can get without a cash infusion.

“We’re not in a good place,” he said. “Make no mistake, we’re at a doomsday scenario.”

And yet, it gets worse.

If the city fails to get a loan, it would trigger Public Act 4 to kick in. That means the state would intervene and do one of two things: The first would likely be a consent agreement that would outline the steps needed to take to balance the budget.

That’s the state the City of Detroit now finds itself in.

If no consent agreement can be reached, or the state decides not to go that route, an emergency financial manager could be assigned to take over management of the city.

The new law that empowers city managers allows them to modify or tear up city employee union contracts.

The law also allows an even more drastic measure, something that Tungate said makes him shudder: The financial manager could recommend to the governor to dissolve the city.

In other words, lump Hamtramck into Detroit.

While that is indeed a drastic and dramatic threat, there is a legal challenge to the state’s relatively new law on emergency financial managers.

If the law is struck down or suspended, it would mean the state’s former law on the subject, Act 72, would kick in. That version of the law was far more restrictive on what financial managers can do.

But before that “doomsday scenario” plays out, Tungate said he has some other options.

By accepting a state grant, which the city will be asking for in the near future, the city has to come up with a plan to balance the books.

Tungate said one of the ways to come up with savings requires cuts across the board, which includes salary reductions, layoffs and contract concessions.

It could also mean contracting out police and/or fire services and other city services.

Tungate said he will ask council to meet in closed session in the coming week to talk about how contract negotiations are going.

At press time Thursday, the council was scheduled to meet in another budget work session later that evening.