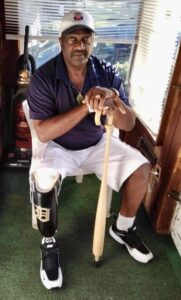 By Alan Madlane
Detroit Tigers fans of a certain age should remember Ike Blessitt.
And Hamtramckans, of that same certain age, certainly should.
Blessitt, a four-sport star at Hamtramck High (Class of 1967), was a member of one of the more memorable Tigers teams of the past half-century, the American League East-winning 1972 squad.
Alas, he only managed five at-bats over the course of four games, striking out twice and not getting a base hit.
But he made it all the way to the majors – something many players who are drafted, even high-level draft picks, never manage to do.
Now 72 years old, diabetic and with a prosthetic leg, having endured a triple bypass last year followed by a stroke mere months later, Blessitt is struggling.
His housing situation is also a struggle, as it’s said to be in rough shape, in need of some repairs.
To that end, a crowdfunding effort has been put in place, spearheaded by Dave Mesrey, one of the Hamtramck Stadium Grounds Crew and a Detroit-based writer.
To donate, go online to gofundme.com and search for Ike Blessitt. The goal is to raise at least $50,000, and as of Thursday, when The Review went to press, over $3,000 had been pledged.
The problems stem from the fact that Blessitt played in the majors prior to 1980, before the establishment of player pensions.
Blessitt was drafted by the Tigers right out of high school in ’67, and did end up playing in the minor leagues for several years, as well as for many years in the Mexican leagues. But he certainly wouldn’t have made a fraction of the cash he could have in just one full season in the bigs.
Alas, it was not to be.
In spite of being a star in football, basketball and track, along with baseball, at HHS, and in spite of how things have gone since, sources say that his true sports love remains baseball by far.
He still takes part in Tigers Fantasy Camps, and uses a homemade batting cage, set up in his yard, to have a place to serve as a hitting instructor for local teen hopefuls wishing that they, too, could one day reach the major leagues.
Baseball writer Dan Epstein had this to say about Blessitt on his own Facebook page:
“I briefly met Ike Blessitt back in 2014, when I had the pleasure of standing on the old Tiger Stadium mound for a few minutes during the opening ceremonies of the ‘Bird Bash’ party at Nemo’s.
“I remember him as a sweet guy with a warm, infectious laugh, whose love for the Tigers and for his hometown of Detroit was immediately palpable.
“Ill health and hard times have unfortunately befallen Ike in recent years, and since he wasn’t on a major league roster long enough to qualify for a pension or MLB-provided health care, he could really use a hand. … If you could find it in your heart and wallet to kick a few bucks Ike’s way, we would all be very grateful.”

To donate go to https://www.gofundme.com/f/Ike-Blessitt

(Editor’s note: In the printed version of this story the quote by baseball writer Dan Epstein was erroneously attributed to Tom Derry of the Hamtramck Stadium Grounds Crew. The Review apologizes for the error.)
Posted April 8, 2022