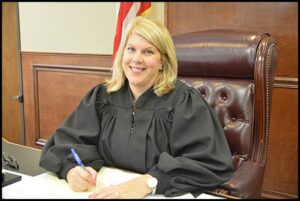 By Charles Sercombe
Hamtramck 31st District Court Judge Alexis Krot will not face disciplinary measures from the way she treated an elderly cancer patient several months ago.
That decision was reached by the Michigan Judicial Tenure Commission, and released on Tuesday.
Here is some background on the matter:
Burhan Chowdhury, 72, had been ticketed for weeds around his garage, an all-too-common problem in Hamtramck.
In a court Zoom hearing that was distributed on various Facebook pages, Krot scolded the man, despite him saying that he was sick with cancer and unable to take care of his property.
“Shameful,” Krot yelled. “The neighbors shouldn’t have to look at that. You should be ashamed of yourself.”
She also threatened to jail Chowdhury, a Bengali-American, if he was ticketed again for a similar offense.
Krot’s treatment of the man was roundly criticized by many in the metro area, and there was even an online petition drive, started by a Warren woman, to have her removed from her position, saying that Krot “has a history of being bigoted to immigrants.”
Over 300,000 people signed it. The Review was unable to contact the petition organizer, Anjum Uddin, for comment on the commission’s findings.
Following the backlash from Krot’s treatment of Chowdhury, Krot herself self-reported the incident to the Judicial Commission, which the Commission took note of, and then commended her for “acknowledging your error proactively, and for appropriately taking full responsibility for your conduct and not attempting to excuse it.”
Krot also waived her right to withhold the commission’s finding from public view.
The Review emailed Krot for a comment on the decision, but at press time on Thursday, she did not respond.
However, according to the Detroit Free Press, her attorney Ken Mogill, issued a statement.
According to the Free Press, Mogill said:
“Judge Krot is a thoughtful, compassionate judge who made a mistake that the Commission aptly noted was an aberration. Judge Krot and I are grateful to the Commission for considering her excellent record as a judge, her prompt acceptance of responsibility for her mistake and her voluntary self-reporting in deciding how to deal with this matter.”
As for the petition’s accusation that Krot has a history of mistreating immigrants, the commission, through its Chairperson Jon H. Hulsing, said Krot “was not racist or otherwise biased” in the way she handled the matter with Chowdhury.
However, the commission did say that, while it was dismissing the matter, Krot violated two Canons in the judicial system’s code of conduct.
“Canon 3(A)(3) requires a judge at all times to be patient, dignified, and courteous to litigants, jurors, witnesses, lawyers, and others with whom they deal in an official capacity. Canon 3(A)(14) requires a judge to treat every person fairly, with courtesy and respect.”
The commission also took into consideration what might have set off Krot.
“We understand that your reaction to them may have been due in part to your unusually heavy docket that day, your disappointment that Mr. Chowdhury was one of too many homeowners in your jurisdiction who have neglected their property, and your frustration that the city’s lag in using screen share was slowing the day’s proceedings.
“We further acknowledge that you became aware of a significant health issue shortly before the hearing. We also appreciate that you have an unblemished discipline history.”
While Krot won’t face disciplinary action, the commission did warn her about what would happen if it receives future complaints about her behavior.
“We are confident this hearing was an aberration and there is no risk of repetition,” the commission said.
“Nonetheless, we are obligated to inform you that, in the event of future misconduct, we may consider this incident in our resolution of that matter.”
Krot has been Hamtramck’s District Court judge since 2016, when she was appointed by then-Gov. Rick Snyder to fill a vacancy. She won an election in 2020, and her current term ends Jan. 1, 2027.