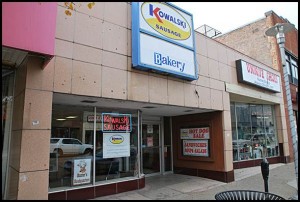 After over 50 years in operation, the Kowalski Deli on Jos. Campau will close next Wednesday. The company said it wants to concentrate more on its factory food products.

A Hamtramck landmark business is about close its doors for good.

A letter went out on Monday from the Kowalski Sausage Co. announcing that it is closing its deli on Jos. Campau, as well as three other delis in the metro area.

“After a long discussion we have concluded that the company should exit the retail store business and focus on our main purpose of producing great, high quality food,” said Michael Kowalski, president of the company, in a letter handed out to customers.

The deli has been in business for over 50 years.

Kowalski did not return a call for comment to The Review, nor has he returned other calls in previous years.

However, his sister, Linda Kowalski Jacob, talked with a Free Press reporter. In the interview, she said all store employees have been offered jobs in the company’s plants.

An employee in the Hamtramck store confirmed that, but said the plant work will be a lot harder on her body.

Kowalski is Hamtramck’s oldest business, having started in 1920. The Holbrook factory’s neon sign of a giant sausage has become a Hamtramck icon.

The company was once closely linked to the city, but in recent years the Kowalski family has become more and more distant to the social and government fabric of the community.

Kowalski recently looked into closing down the factory and relocating into the suburbs, but that deal apparently fell through. City officials are looking for a new space for the factory to relocate.

Or, the company may be considering to stay put and expand its existing factory. The company recently purchased several properties on Geimer St., near its plant, during a county tax sale.

Kowalski has been expanding its food product line to include frozen foods. It bought Homestyle Foods, a salad maker, and Dudek’s in recent years.

William Nemeth of Lumpkin St. has been a regular shopper at the deli, and although the company says its products can be found at many markets, he wonders if his favorites will be easily found.

“It’s no guarantee all their products are going to be there,” he said.

On the bright side of the deli closing is that it’s set up for a restaurant to step in, said Community & Economic Development Director Jason Friedmann.

“I have three or four people interested in the site,” he said.

Friedmann also said that Kowalski is planning to open a wholesale store at its plant site and possible a café.