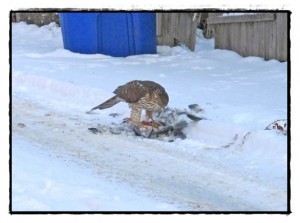 Recently, on a sunny late afternoon, I spotted a rare, fascinating scene midway down the alley between Edwin and Evaline streets, east of Gallagher.

It was large bird of prey of some kind, on the ground, giving something its full attention at its feet. Or talons, I should say. This I could see from the sidewalk. But I wanted to get closer. And since I had my camera, I wanted to capture what this big animal was up to.

I walked slowly toward the bird, snow crunching below me as I stepped. I was afraid I would startle it. But that was not the case. It stayed put, occasionally glancing up at me, but eager to get back to its business. As I got closer I could tell it was a hawk, impressive in size, most likely an adult, clutching what remained of a pigeon with its talons. It made frequent stabbing motions with its beak, coming back up with bits of flesh and feathers.

Though not a sight for the squeamish, I found this magnificent predator naturally feeding a thrilling sight. Made all the more so by the fact that it was in the heart of this densely-built urban community. It didn’t care that I was there. I crept closer, to within about 10 feet, and snapped away. I even got about a minute of video. The bird never stopped feeding.

I’ve seen hawks in the city before. I’ve also seen what look like Peregrine falcons, but I’ve never actually confirmed that to my satisfaction. Owls must be here as well, but those quietly efficient nocturnal hunters are incredibly hard to spot. I’m convinced that with the population of eagles in the Great Lakes region on the rise I’ll spot one of those in my neighborhood one day. A friend says she’s already seen them just outside the city.

Why are they here? Why not?

Winged predators will eat mammals like moles, squirrels, mice and shrews. They can also eat raccoons, possum, rabbits, small birds, ducks, bats and fish, snakes, lizards, frogs and toads. And, of course, small unattended pets. Some fly through as they migrate to warmer climates; others remain the year round.
Keep your eyes open for wildlife in flight over our streets and alleys. You might get a glimpse of something remarkable, something you thought you’d never see in Hamtramck.