Lots of city lots for sale 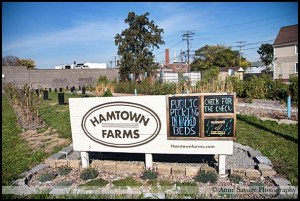 Next Thursday, Hamtramck will hold its first round of auctions for city-owned lots. This auction includes the site where Hamtown Farms is located.

Get your checkbook out.

There is going to be a land rush come next Thursday, Nov. 21, in city hall.

For the first time in about 40 years, the city is going to sell its empty lots. The lots had been held back until the city settled a longstanding housing discrimination lawsuit.

Long story made short, the city finally settled that matter last spring, which allowed for a mass auction of almost 300 city-owned lots. But not all at once. The city is going to sell the parcels in seven separate auctions, starting with lots south of Holbrook and west of Jos. Campau.

In all there will be 67 lots up for sale in this first round.

This batch includes the five controversial lots that make up Hamtown Farms that are apparently wanted by the Kowalski Sausage Co. for expansion. That has lead to a rushed fundraising campaign by organizers of Hamtown Farms to outbid Kowalski.

There is a minimum $250 bid for each lot and bidders must submit a certified check made out to the city for $100 before the auction begins. If you win, that check will go towards the payment for the lot.

The auction will be in the second floor of city hall and registration begins at 10 a.m. and bidding starts at 11 a.m. (For a list of lots, visit city hall or go to page 5 of this week’s issue of The Review).

Michael Davis of Hamtown Farms said he’s ready for the auction and as far as donations go he said, “We’re doing pretty well. … Money is coming from all walks of life.”

Of course, Davis didn’t want to say just how much has been raised so far in order not to tip off Kowalski.

The Review has attempted to talk to someone at Kowalski but no calls have been returned.