Mayor can soon add shop owner to her title 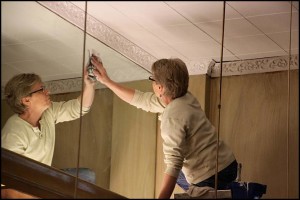 A worker helps renovate the former Cody store on Jos. Campau that was recently purchased by Mayor Karen Majewski

By Alan Madeleine
Special to The Review
You can’t say Mayor Majewski doesn’t put her money – and time – where her heart is.
For the past few months, Majewski has been redeveloping the old Cody Building, a former haberdasher at 9600 Jos. Campau, which she and her husband have owned since last May. The mayor has big plans for the space, after the renovations and legal touches are complete within about 60 days.
With the labor being handled by Helping Hands Construction and Remodeling, owned by former Acts 29 Pastor and city employee John Meyers, the project appears to be on track.
Majewski’s grand plan is to have a thriving “vintage and ethnic-inspired” retail space, which she plans to call Tekla. The space will feature both new and used clothing, jewelry, linens, housewares and more, as well as serve as an outlet for crafts and artisanal items made by locals. 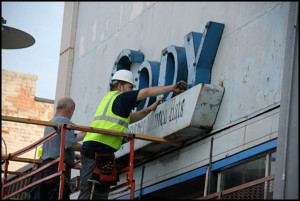 The sign for the former store is taken down.

“It’s something I’ve wanted to do since high school, really,” Majewski said, when reached by phone about her concept.
The idea finally gelled when, according to the Majewski, “a bunch of circumstances all came together” with the right timing.
For one thing, the price was right.
“We were thrilled by what we paid” for the property, Majewski said.  “(The project is) a scary thing, but then, I’ve always liked to try things that take me out of my comfort zone,” she added.
So, is this an attempt by the mayor to lure other businesses to the once-thriving downtown strip, by showing a little DIY enterprise?
“Absolutely, that’s part of my idea,” Majewski said. “I see so many exciting things on the horizon (for Hamtramck).  I would’ve really regretted passing up this opportunity.
“It’s a prime time to open a business here.”
Why the name Tekla?
“It’s a woman’s name,” said Majewski.   “I liked the fact it seemed a bit old-fashioned, and yet somehow also had another quality to it,” she added.
Majewski was quick to praise the D-Hive entrepreneurial start-up gurus for a course she took with them that, she says, gave her the tools and the drive to want to take on the project.
“They’re having another course this spring or summer, I believe,” she added.
The tone for the planned décor was inspired by the discovery of a vintage-era full-length mirror with wooden columns behind paneled walls, Majewski said. “Nobody knew this beautiful piece was there.  It’s probably from the 30s, and very elegantly carved.”
Her plan is to hire help to run the store once it’s time for the grand opening, but to also be a presence there herself. At least, as much as her day job will allow.
And does she have dreams of owning any more pieces of her beloved town?
“I wish I could buy up each and every empty building in the city,” she said.
But, one thing at a time.
“We’ll see how this one goes first,” she said with a kind of a wink in her voice.