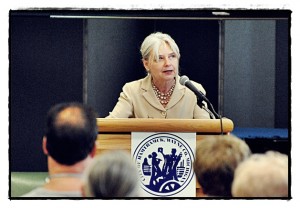 On Sunday (June 27) Mayor Karen Majewski gave the annual State of the City address, and let’s just say it was a good thing everyone was sitting down.

Though attendance was considerably less than in years past, the importance of the speech was significantly greater. Unlike the 2009 address, which painted a more rosy and bright picture of Hamtramck’s future, this year’s speech was ominously darker.

But first, the good news. Over the past year, the city has experienced many achievements, a fact that was duly noted by Majewski.

“It is no small thing, with the biggest economic downturn since the Great Depression staring us in the face, that we’ve been able to accomplish so much,” she said.

Specifically, Majewski noted the completion of the new Department of Human Services building on Jos. Campau, the traffic light replacement project along Caniff, and the sidewalk replacement currently underway on Brombach and throughout the city. She also praised the Master Plan revision process, which should be completed sometime in late summer or early fall.
Additionally, the mayor spoke of several grants awarded to the city, including a $400,000 Environmental Protection Agency (EPA) grant to test for hazardous materials, a $1 million EPA grant to set up a revolving loan fund to help fill financing gaps in redevelopment projects, and $1.4 million Neighborhood Stabilization Funds (NSP1) – as well $15.4 million in NSP2 funding – to be used to help settle the long-standing R-31 housing discrimination lawsuit.

In the coming months there will be even more projects and improvements. The city’s Community and Economic Development Department will begin working on re-establishing and expanding the Hamtramck Shuttle, and it will continue to work with companies interested in opening new businesses in Hamtramck.

Majewski also pointed out the benefits of living in the city, citing a lower cost of living coupled with a higher level of governmental efficiency.

“We’ve been paying down our debt, performing at a par with other financially stable communities, and passing audits with no major issues, all while our property taxes were kept lower than those of surrounding neighbors like Detroit, Highland Park, and Harper Woods,” she said. “That does not happen through mismanagement or short-sightedness, but through sound and balanced management.”

Perhaps the highlight of the speech – it certainly was for the mayor – was the announcement that the city had finally found in PLAV 1 Hall a location for its long-awaited Historical Museum. Like last year, the mention of this brought tears to her eyes.

Unfortunately, they weren’t the only tears she shed. After highlighting the accomplishments of the past year, the speech focused on the coming year and the many potential pitfalls that lie ahead. Most notably, the dispute between the city and Detroit over tax revenue from the Poletown plant has caused the city to adopt a fiscal strategy that taps into its emergency funding, a plan that Majewski says could lead to the state taking back control of Hamtramck – and soon.

“That is an unsustainable strategy, which by best estimate will deplete the fund and send us into deficit spending – and thus into receivership – by the first quarter of 2011,” she said.

Though the overall future of the city is uncertain, Majewski did say that one thing was sure: the upcoming year will be an important one for the city. Ending her speech with a call to action, she urged Hamtramckans to get involved with city and to help make it a better place for all.

“There is a whole lot going on here, and even more that needs to happen,” she said. “You know what those things are. You may even have an idea of how to make them happen. Now is the time when your ingenuity, good will, and drive are most needed.”