Medical complex is part of Conant reinvention and rebirth 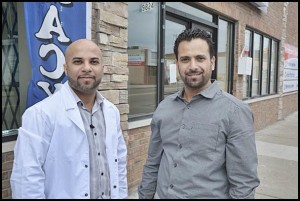 Bandar Saleh and Hasson Shariff had a vision for a former bakery on Conant, and they saw that come to life as a new pharmacy and medical clinic.

By Charles Sercombe
A few years ago a former Polish bakery sat empty and falling apart on Conant near Evaline.
But much like the rest of Conant in the past 10 years, new life is coming in.
First it was the Bangladeshi community, and now it’s the Yemeni community stepping up to reinvent the city’s second major retail strip.
The bakery has now been transformed into a medical complex, with Azaal Pharmacy on one end and Premier Medical attached to it. The building’s façade was replaced with attractive brick and new walls went up inside.
All of this was the vision of Hasson Shariff, who saw potential here. The Dearborn native hooked up with Bandar Saleh a couple of years ago to make that vision come to life.
Saleh, a Hamtramck High School graduate, had recently graduated from pharmacy school in Florida and wanted to come back home.
“He wanted to do something big in Hamtramck,” Shariff said of his new friend.
Not soon after they opened the medical complex, they knew they were on the right track.
“We didn’t expect this kind of success,” Shariff said.
Their business model was simple: Keep the building clean inside and out and “treat everybody like family members and not a number,” Shariff said.
They were also savvy to realize that those folks who have no medical insurance have needs too.
There is a prescription plan that is highly affordable for those without coverage and medical clinic exams are just $40 for them.
“We’ve made expenses as minimal as possible for them,” Shariff said.
They even went one step further and offer free home delivery – which is a major plus for the elderly.
“We look for niches,” Shariff said about how he differs from the competition in Hamtramck, which is a special achievement considering the saturation of medical clinics and pharmacies here.
Development in Hamtramck has been on the rise, and Shariff said there’s a good reason for that.
“We feel safe in Hamtramck – not like in Detroit,” he said.