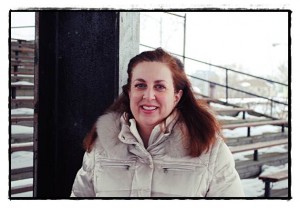 Who she is: Born in Detroit and employed in advertising for nine years, Rebecca Binno Savage attended Columbia University’s school of Architecture, Planning and Preservation where she received a Master of Science degree in historic preservation in 1997. After working as a historic preservation specialist for five years with the Greater Downtown Partnership, she is currently employed at Kraemer Design Group as Historic Preservation Lead.

It doesn’t stop there, though. Rebecca is also on the board of directors for the Architectural Salvage Warehouse of Detroit, serves as Vice President of the Detroit Area Art Deco Society and is co-author of “Art Deco in Detroit” published by Arcadia Publishing in 2004.

It seems as though you’ve always been fascinated with architecture and historic preservation. What is it about the past that is so captivating for you, and why do you feel it is necessary to preserve?

Binno Savage: I think our architecture and built environment is a direct connection to history and the people who came before us. Some people might like to read about history, or watch it on television, but I like to walk in the buildings where Detroiters walked one hundred years ago.

Or get the feeling of 1920’s Hamtramck in an old-fashioned store like Kopytko’s on Jos. Campau, or in a school like Holbrook School, or drive by my great-grandparents’ house on Lumpkin Street.

If those places are demolished we lose a connection to the past, and actual evidence of history that is much more real and alive than something we can ever learn about any other way.

That’s a good way to look at it. What is one project that sticks out in your mind where you were able to really accomplish something?

Binno Savage: I’d say the Kales Building in downtown Detroit on West Adams Street. Back in 2000, I helped the City of Detroit market the building to developers who ultimately renovated the vacant, deteriorated office building into really nice apartments.

The project took a number of years before it was completed, but I can say that I helped start it, and I also designated the Kales Building a historic building. Did you know that one of the Kales family members lives in Hamtramck today? I found that out much later after I had finished the project.

What about these days? Your new job as the Historic Preservation Lead at Kraemer Design Group has you assessing buildings along the proposed Woodward light rail line for historical significance – can you explain that a little more? And have you come across anything exciting or unexpected yet?

Binno Savage: For the Woodward Light Rail Project, I assessed the significance of Woodward Avenue as a historic street.

I know that sounds academic, but I found so many historic and cultural events that are tied to Woodward – that it really is a major part of Detroit history. I’d say the most exciting thing I learned in researching Woodward was that beginning with Harry Truman, presidents walked in the Labor Day parade on Woodward Avenue – and John F. Kennedy’s walk was the most remarkable – over 100,000 people came to Campus Martius to hear him speak. The tradition ended in the 1970’s though.

It’s a shame that tradition ended. Shifting the topic from Detroit to Hamtramck, what is your relationship with this city? More specifically, what brought you here and why do you continue to stay?

Binno Savage: I moved here in 1997 directly after finishing graduate school at Columbia University in New York City. I knew I wanted to move back to Detroit, and I wanted to move to a place with the same kind of urban, walkable lifestyle I had in New York.

Then I met my future husband here, and we got married in Hamtramck at Our Lady Queen of Apostles church. Not long after I moved here, Mayor Zych asked me to join the DDA board, and I’ve been involved as a volunteer board member in some way since I moved here. I continue to stay in Hamtramck because of good friends here, it is multi-cultural and close to my office downtown.

There certainly is a wide variety of culture and history to be found in the city. On that topic, many of our readers may recognize your name through our stories about the work you’re doing to preserve Hamtramck Stadium in Veterans Park. Why should Hamtramckans care about the stadium, and what are some of the positive results that could come from doing so?

Binno Savage: The Hamtramck Stadium has a great history, but more importantly, it could really be something terrific for our town once again. There is a great potential for the stadium to be a place for the community to watch sporting events, concerts and yes, baseball games.

I think that our efforts to get the stadium and the baseball field listed on the National Register of Historic Places will be the start to leverage other funds from institutions – and maybe even Major League Baseball – to help restore the stadium, and make it secure.

We are on the right track to get this process started, and the City Council, Mayor Majewski, and City Manager are all behind this effort. The team of people on the committee are all excellent, and I think we will bring more people to the project as we get more accomplished.

You definitely make some good points, and it’s clear you have a vision for the stadium’s future. Ever think of running for office? Regardless of your answer, what do you think of Hamtramck’s current financial problems, and how would you go about solving them?

Binno Savage: No, running for office is not for me. Hamtramck’s serious financial problems are multi-faceted, and the solutions will be multi-faceted. There is no one single answer to solve the problem.
I would like to see the administration and Council work together to solve our crisis and prevent another Emergency Financial Manager takeover. You were not here at that time, but it was a terrible administration of the City, and no one could get a complete response or honest answer to any question they asked.
The EFM was not held accountable to anyone – and he certainly did not feel accountable to the citizens of Hamtramck. He kept collecting a paycheck as long as he could.

Those are indeed some things to consider. Since these questions may be getting a little too intense for some feature fluff, I’ll walk you for your last at-bat. There are two big events coming to Hamtramck soon, so I have two final questions: if you’re attending the Blowout, what bands are you planning on seeing, and if you could only eat one flavor of paczki on Paczki Day, what would it be?

Binno Savage: Sorry, I have not made plans for attending the Blowout. Could be…not sure. As for the Paczki flavor — custard. But I will say yes to all of them!

Mmm, delicious. Thanks for taking the time to answer our questions, if there’s anything else you’d like to say, speak now or forever hold your peace.

Binno Savage: Lastly – Review readers are OUTSTANDING Hamtramck residents. Because they take the time to read this newspaper that means they care about this town, and the people in it. Thank you Hamtramck Review reader for even considering reading my profile, and thank you for caring about Hamtramck!